First off, I would like to say thank you so much for reading my blog. With over 650 hits on my Victoria Half Marathon Blog, I am very humbled by seeing how many people were reached by my recap of the race.

Now for the main reason of this post! I am incredibly happy and excited to announce that I received confirmation this morning that Saucony will continue to support me throughout 2013. Each October, existing athletes are required to reapply and I always slightly worry that maybe this year, I didn't perform well enough to keep their support! Now I have another year to continue to work hard in order to make Saucony proud!

This may sound like I am only saying it because I am sponsored by them; however, I am truly in love with Saucony products (really!). They are a great brand and if you saw me often, you would rarely see me in anything but Saucony apparel. This includes when it comes to regular clothes. You might get lucky if I dress up and go out for the night, but otherwise I wear a lot of Saucony and on my feet, you will likely see me in Kinvara's. It is my go to shoe and I only change it up for some shorter races where I might hit the A5 or Fastwitch 5. 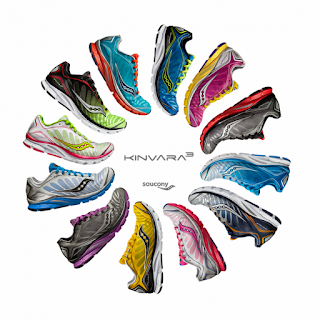 Nevertheless, I am excited for 2013. Now that I have achieved some goals such as sub 18 for the 5km, sub 37 for the 10km and sub 80 for the half marathon, I have set some bigger more exciting goals. These goals will require some hard work and determination; however, I am ready to put in that work.

Thanks again Saucony! I really appreciate the continued support from  you!

** Stay tuned later this week for some upcoming race reports as I completed 2 back to back races this past Saturday and Sunday.


What a beautiful day to race. There were sunny clear skies along with early morning mild temperatures (at least for the half marathon) and little wind. The night pre-race was spent getting race packages and relaxing in the hotel until my roomie (Melissa) and her bf (Shayne) showed up. We went out for a late dinner and relaxed until the lights were turned off shortly after 11. This is a bit later than I tend to prefer; however, due to the later dinner it was understandable. I then proceeded to lie there tossing and turning with my mind running wild. It wasn’t necessarily race thoughts going through my mind it was pretty much just everything and anything.

I think I briefly fell asleep and then around 1am, some noise out in the hall began. There was a wedding and reception held in the hotel and I have a feeling the reception had just ended. I finally fell asleep again only briefly before being woke up again. Then another brief sleep before being awake around 2:30 from slamming doors and yelling and banging. At this point I had enough. We figured out it was the room next door so we called down to the desk. By this time I had less than 30 minutes sleep. Thankfully it was quiet after that so I finally fell asleep only to wake up shortly after 5am to eat breakfast after about 2-3 hours sleep the entire night.

Pre-Race (Mel and Me) 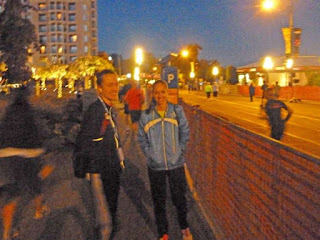 I headed out on a warm up and felt decent though my legs weren’t feeling the perky feeling I was looking for.  A quick bathroom break at the hotel, rush to drop our clothes at the elite tent at the finish line and off to the start I went with enough time for one stride. Not ideal for me as I like to get in a few. Soon we were on the line and ready to go.

The race went out at a quick pace, but I made sure to go out comfortable and not get caught up in the “race.” Melissa was right beside me which was no surprise as we had the same goal of getting at least sub 1:20:00 at the slowest. We hit the first 2km in 3:43 and 3:44 which was slightly faster than pace (3:47-3:48) but not insane. The hill up Johnson (I think) meant a slightly slower pace at 3:51. I could bore you all with the paces for 21km but I won’t. 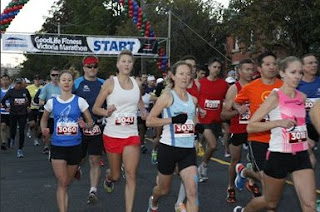 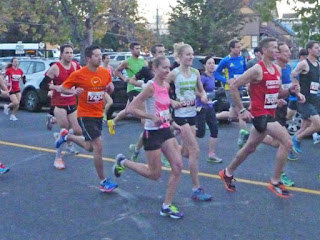 Let’s just say after 2km I stopped looking at my watch. The first few km were comfortable; however, they weren’t as comfortable as they should have felt at that pace. I decided to forgo watching the clock and just run by feel. I stayed with Mel until about 5km at which point she slowly pulled away gaining about 30m on me at the most. I would reel back some of that distance and fall off.

I am good at this face 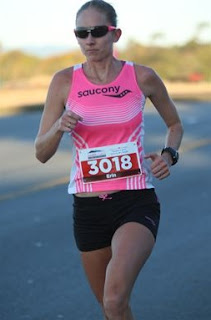 Around 9km I believe 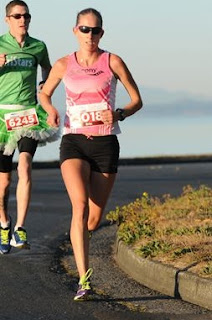 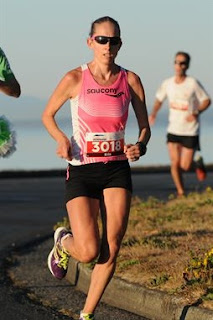 I can’t remember which point I caught her again along with a Vancouver Falcon’s runner named Ramsey, but I reeled them in, pulled ahead slightly and then dropped off again. This time I didn’t lose quite so much ground, but at least 10-15m. At about 14-15km I heard “Go Cedar Girl” from a few women who were still heading out to the turn around. This made me smile and honestly gave me a slight boost. I have no idea who these women are, but I have heard this twice in races now and I thank them for their support. You see I live in Cedar, which is basically on the outskirts of Nanaimo and I do most if not all of my training in this area. 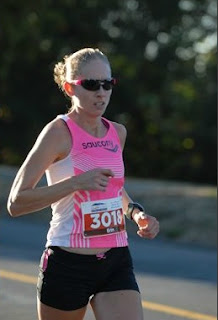 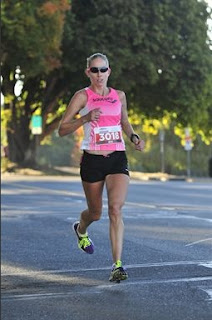 Then around 16 (I think) we hit another hill and though I had been right behind at this point, I had a “mental” moment and fell off pace. I caught up again around 18 (again I think) and took the lead but this was again short lived with another mental moment. I held 5-10m behind for the final 3km. When we hit the final 400m I had a HUGE cheering squad at the final corner and they were loud. Basically telling me I had to go. At the time I didn’t clue into who it was, but then I found out it was the Running Room/Bastion Running crew who some of them knew my goal and were watching the time. Thanks for the screams Cheryl. I didn’t know it was you at the time, but I definitely heard your voice. 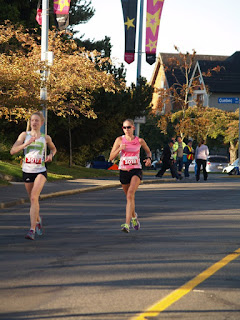 Mel picked up the pace and I did my best to stay with her.

Heading to the finish 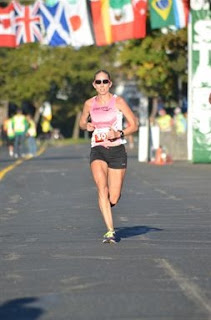 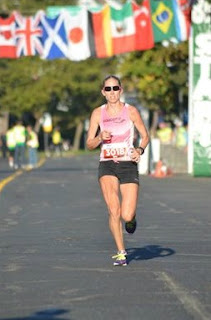 Trailing in the last 100m 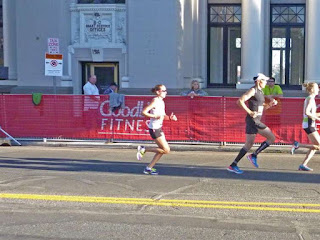 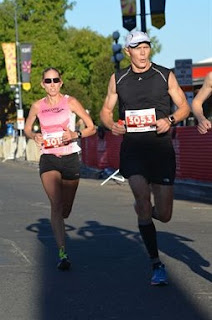 In the final 100m we rounded a slight corner to see the clock, which was ticking 1:19:4x and I just gave it everything in a pretty decent final sprint to finish in 1:19:57 just passing Mel and also another runner Garth in the final meters before the line. 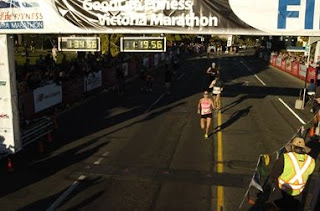 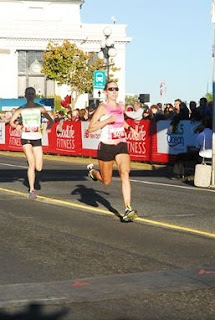 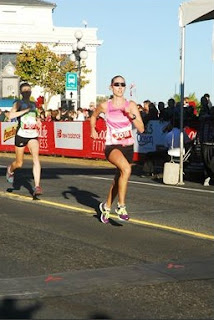 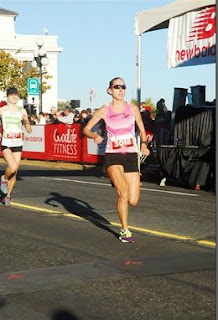 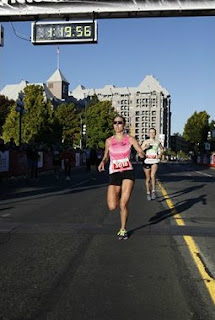 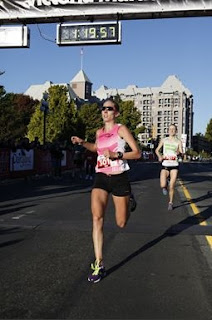 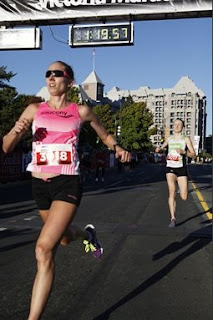 It turns out my final km and a bit were my fastest of the entire race. Oops. I guess that means I probably had a little too much left. In the end I was 7th female (out of 2938 females) and 4th in my 30-34 age group (top 3 were all in my age group) with speedy Natasha “Wodak” Fraser winning in a blistering time of 1:14:06 SMASHING her old course record from last year of 1:15:27. 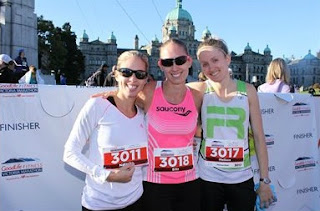 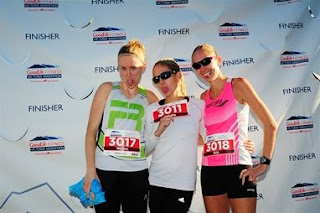 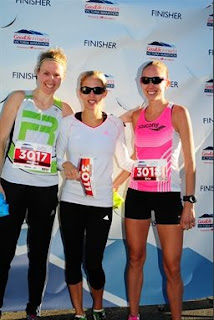 On a side note, I headed off on a cool down with Tasha and Mel. We headed back out on course to find Tasha’s friend Kim. When we were at the 1km marker, 2 participants called for medical help as they were holding up a girl whose legs were clearly giving out. Tasha said since I was a nurse I should help; however, I am not a nurse per say but a care aide with basic first aid training. The 3 of us took the girl from the other racers so they could finish their race and it was clear to us that this girl, who we found out was Cindy via her bib, was not getting her legs back. We sat her down and she proceeded to breath rather rapidly and eventually passed out cold. A volunteer came over and called for paramedics.

The poor girl would not respond to any stimulus including verbal and pain. She came in and out of consciousness and had no idea where she was, what city she was in etc. After a few minutes out cold for the 2nd time, she woke up again and still was slightly confused. Thankfully the paramedics arrived and as we sat her up to get her into the truck she stated “oh I am racing” to which I think I muttered “well you were racing” and proceeded to stop her Garmin as we helped her to the truck as she still wasn't able to hold her own weight. After explaining what happened, we left her in the hands of the professionals. Wherever you are Cindy, I hope you are okay!

Edit: I have since been in contact with Cindy thanks to the lovely race committee. Cindy is doing well, though obviously slightly disappointed that she came within 1km of the race only to not be able to finish.

1:19:57!!!!!! FINALLY broke that darn 80' barrier that has eluded me all year! I am working on a race report as we speak. Might wait until some race photos are posted though. Look for a more detailed race report closer to the weekend!
Posted by Erin at 7:52 PM 2 comments:

Saucony Shipment and What's Up Next!

I am getting kind of bad at this whole blogging thing. You see, while I was away in Flagstaff I blogged quite often because I was doing things that were somewhat interesting; however, since returning home and back to the grind of training/working/eating/sleeping, things don't necessarily seem interesting enough to make people read it! So you all end up with race reports and only race reports. Sorry about that!

Recently, I received my fall/winter shipment from Saucony Canada. WOW! They spoiled us! I love the gear. I mean I always have; however, I really love their new Kinvara line. If you looked in my closet, it is actually kind of sad looking to those who are into fashion. Let's just say that a majority of my clothes are Saucony running clothes. I have a few nice tops/pants, but I am not going to lie here. I live in Saucony clothing about 95% of the time I am not at work. Work is spent in scrubs. What can I say, I like to be comfy. 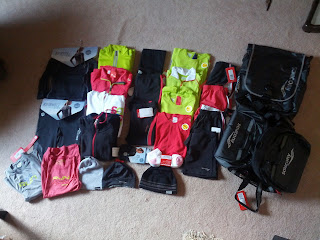 So what's next? This weekend I will compete in the 2012 Goodlife Fitness Half Marathon. This is the 3rd time I have competed in the half marathon; however, it is also the 14th time I have taken part in the overall event. As my bio says, I started running early at age 8. By age 10 I was running some road races (smart? probably not). I looked back on results and not only did I see my debut 8km in 1991 (would have turned 10 the following week) in a finish time of 34:02. Yeah I was a freak show fast kid.