Lately I have been busy with coaching the NDSS high school XC team. We have a great group of kids this year, consisting mostly of girls and a handful of guys. The past few weeks the kids have had their Island Age Group Championships (Oct 18th) where the younger kids were able to run against their own grades and then their Island Championships (Oct 26th) where they raced in a big group of grades 8-12.

Last year at the Island Championships, our girls team placed 2nd behind Oak Bay (out of Victoria), but this year would be a different story! This year, our girls dominated with Miryam winning the overall race and then thankfully most of our girls (Carly, Becca, Tkia, Abigail, Emma, Rachel, Abbey, Shishton and Ashley) were lumped pretty close together. Top 5 girls scores combine for the team score.

This year we took top spot, FINALLY dethroning Oak Bay by only 1 point. Let me point out that according to the newspaper, Oak Bay has dominated both the men's and women's division for 9 years. Our girls were ecstatic to take top spot and bring the trophy home to Nanaimo. And not only that, the boys division was taken by another Nanaimo school (Dover Bay). That is right Victoria, Nanaimo has some pretty darn talented kids! Congrats to both NDSS and Dover Bay. 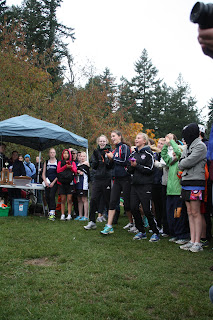 Top 3 spots in the girls race all went to Nanaimo kids (Miryam and then Marita and Erica from Nanaimo Christian School). Joel (brother of Marita and Erica) also took bronze in the guys race, so some definite talent up island. 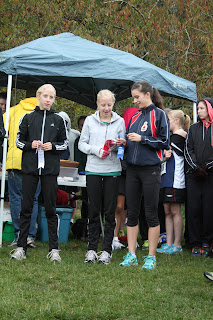 Our boys (consisting of Liam, Tyler, Yosef, Mike and Kaleb) ran well too, but unfortunately they did not make BC's. So we are off to Kelowna for Nov 5th for the BC High School Championships.


Lastly I want to give a big shout out to the bus driver, who wished me good luck in my race as I got off the bus. I didn't realize I looked under 18, but now that I turned 30 on the 17th, I will take that as a compliment! Pretty sure I don't look under 18 though. 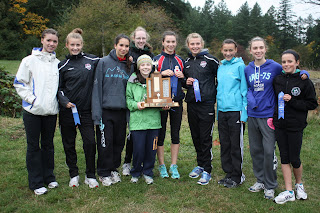 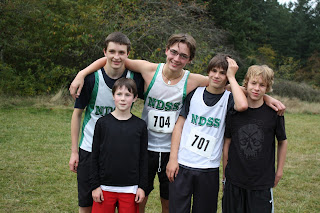 
After a very LONG and frustrating 22 months, which included a good 12 months of abdominal pain, 1-2 months of my hip slowly acting up, 3.5 months of no running and a total of 8.5 months since racing, I finally returned back to the start line of a race. It had been just under 5 months since I made my slow return to running with 15 minute runs, where I doubted myself that I would ever get back to my former shape. I still ran with pain off and on as my body reminded me that it was not fully healed; however, I was happy as can be to find myself in Victoria on October 9th for the GoodLife Fitness 8km.

Originally I had my hopes up to run the half marathon; however, going from 3.5 months of no running and spending 5 months getting back into it, there simply wasn't enough time to get fully ready to take on the half marathon. I am pretty sure I could have run and had a decent race, but when Matt suggested that I run the 8km instead, I realized that he was right. I was kidding myself thinking that I could take a decent crack at the half and what was the point in going out there and having an okay race. I want to really take a run at the half the next time I toe the line. So the change was made to the 8km.

I took the weekend off work and headed down to Victoria on the Saturday. I had some dinner with my YYJ friends and simply chilled. After a crappy night sleep, I was up and ready to see what I could do. I did a warm up and within 5 minutes my hip started acting up. Oh great I thought as I had been having hip problems recently that seemed connected to my lower back being stuck. I had been to Joe a few times in the weeks leading up to the race in order to be adjusted. Now here I found myself, on race day with my hip feeling off. Thankfully though, I stopped and did a few leg swings and got the biggest POP ever out of my hip. Things were good after that!


Warm up with Byron (I was actually doing some drills) 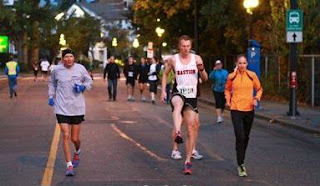 On the start line the nerves started in as I stood there with Amy Schneeberg while sporting my ViziPro Orange Saucony gear.

On the start line (left side) 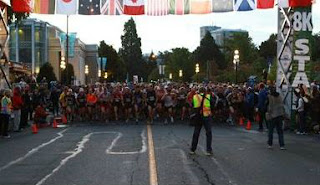 Amy mentioned that she would be lucky to get 30 flat, to which I said that was the same. I really had no clue what shape I was in, but my ultimate goal was to get as close to 30 flat as possible with the hopes of going sub 30. 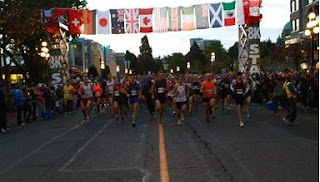 Off we went and Amy and I went out together. We stayed together until about 2km at which point I started to drop back. Amy was so kind in trying to encourage me on and I simply didn't realize that I got so far off pace, but it happened. I struggled between 3-5km and then finally got back into the zone for the final portion of the race. I was in 7th position for females the entire way and was slowly clawing back at Becky Woods. Unfortunately the race ended before I could catch her and I finished 3 seconds back of her at 30:05. 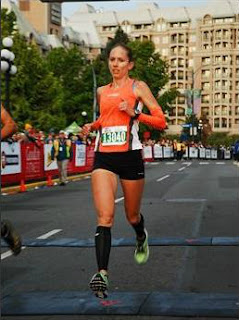 Glad to be done! 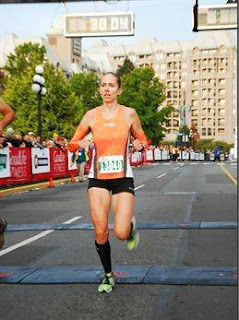 Overall I was slightly disappointed not to break 30 and also due to the fact that I lost focus mid way through the race; however, in the end I was ecstatic to be back out racing and to have a race without the pain I had felt before. The last race I ran was an 8km in January where I ran 29:31. Really if you think about it, 34 seconds back of where I was 8.5 months ago, its nothing to be ashamed of. I could tell though that I lacked the race fitness and tactics.


Up next is BC XC in Aldergrove on October 29th. I have no idea how this will go, but I know I will have fun and simply enjoy racing. I am finally ready to show off the Saucony name and represent what I am capable of! Thank you to everyone who has hung on beside me, supporting me and offering me encouragement throughout my frustrating ordeal! You guys kept me going! Also thanks to Jonathan Foweraker (Elite Co-ordinator for Goodlife Fitness Weekend) for hotel and entry!

I know, I need to post. I have been so incredibly busy between training/coaching the high school kids and working extra hours, that I am procrastinating big time about updating my blog. I will do my best to do it ASAP. Things are going well and I after 8.5 months of no racing (including the 3.5 months no running), I made my return to racing back on October 9th. I am also finally seeing what it is like to run pain free again. Hard to believe that all of the pain (starting with the lower abdominal) started back in December 2009. Running is enjoyable again where I can finish workouts and be able to sneeze without being crippled with pain! Blog soon, I promise!
Posted by Erin at 11:41 PM No comments:

Just call me a model!

No lies that I have been neglecting my blog recently. The internet was pissing me off, I banned myself from Facebook for a bit in order to deal with it. I was less than motivated to write because of it; however, I have decided to finally update it. I should mention that I have also been pretty busy with work.


Speaking of work, my poor co-worker who works opposite evenings as me (in my assisted living department we only have 4 staff, 2 mornings and 2 evenings) sent me a text back in August telling me that he had torn his Achilles tendon while playing floor hockey. While he isn't a complete hard core runner, he does enjoy to run and even goes in races and had planned on the Good Life Fitness Half Marathon on October 9th (obviously out of the question now). After going through my injury, I knew exactly what he was going through, though with his requiring surgery it was probably worse.


While it sucks for him, that meant that he was now off of work and that opened up extra shifts for me. So now instead of part time, I am working full time with 3 extra shifts every 2 weeks. So yes, I am busy busy busy. It's amazing that after working part time for nearly 3 years (7 shifts within 2 weeks), how hard it feels to work 10 shifts (yes I realize that this is normal for most of the world). No word on when he will be back, but I am sure I will be sick of working the extra shifts by the time he does! Get better Andy!


In other news, just over a week ago I took part in a photo shoot for a calendar featuring Vancouver Island Runners. The calendar is 100% for charity and will benefit the BC Cancer Society. A lovely lady named Skye Overall is organizing it and it will feature numerous runners from both Victoria and Nanaimo. I was lucky enough to be selected for the project.


First off, I met Darcie at Rich 1 Salon where Rich himself donated his time doing both hair and make up. This was the longest it had ever taken me to get ready for a "run" before. Definitely weird to be pampered and at one point he had backcombed my hair on the top of my head, to which I asked if he was giving me a Snookie hair do. Luckily though, after everything was done, it was still a pretty natural look. 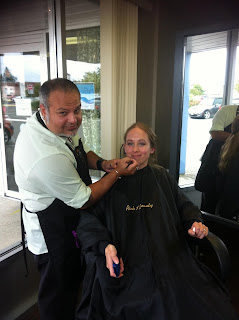 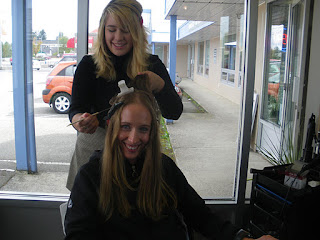 From there, it was off to Westwood where I met up with the wonderful photographer Morgan Deno.We then visited a few spots around the lake taking photos. I felt awkward as can be as I simply am not a model. I think the first thing I asked was whether I was supposed to smile when I ran or not because it was something I wasn't used to. Thankfully I was told that I could simply stare straight ahead and run. Perfect! I left the shoot thinking "I hope my photos don't look incredibly stupid." 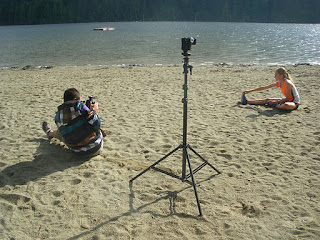 Thankfully, they didn't (I did only see 2 shots though), which are these below. They do not include the one that is being used for the calendar, which I have not seen either. 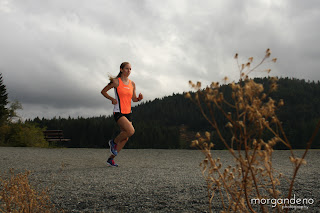 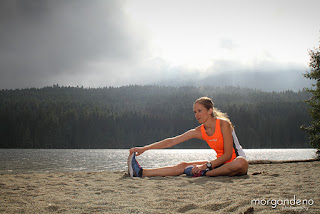 The calendar will be out in November sometime and should be available at a running store near you (I think Frontrunners has said they will carry them, Frontrunners Westshore for sure). Remember, all proceeds go to BC Cancer Society, so please buy them (they'll make good Christmas gifts too)!

Overall it was a fun day in which I got to meet some really awesome people in person, including of course Damian Allen, Skye Overall, Kirsty Sheldon, Darcie Nolan, Morgan Deno and of course Rich Tchamourian. Not to mention I briefly met Adam Hawryluk just before leaving (though we weren't formally introduced). Thank you all so much for the fun!

Also Thank you to Matt Merko at Saucony Canada for sending me a new singlet for the shoot.
Posted by Erin at 11:38 PM No comments: