A week ago today I was lucky enough to attend a special charity performance for the Shadow's Foundation here in Flagstaff. As per their website "The Shadows Foundation mission is to provide financial assistance and support services to Flagstaff and Northern Arizona residents. Shadows seeks to meet the needs of individuals and their families affected by life threatening disease and illness when they need it most."

After a Alicia and Cat turned down AJ's invitation, I was the last one left (lucky or unlucky one?) and I decided sure why not. Set to perform was comedian Scott Henry, local band Telescope and America's Got Talent 2012 finalist David Garibaldi and the CMYK's. I was right near the end of making dinner, having ate half of it already, and literally was told "we have to go now." I threw on a jacket and away I went in my casual clothes, only to get there and see many of the Flagstaff ladies were fully dressed up! Awkward!

The show ended up being pretty great. Scott Henry was hilarious and even the local band Telescope was great. Not sure I had heard them before, but I enjoyed it. Next up was the premier act, David Garibaldi and the CMYK's. If you ever watched last year's America's Got Talent you will remember him as the artist who paints pictures to music. Generally he paints portraits and the way he does it is quite fascinating. My only regret (other than my utter casual attire) was that I didn't bring my phone or camera to get some photos of his work. I will have to steal some internet video instead. 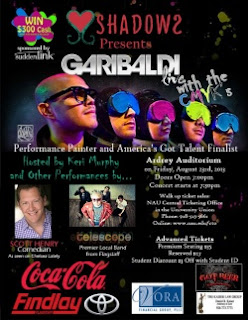 Comedian Scott Henry- A lot of this act was performed. He has apparently been on Chelsea Lately, but I don't watch that show so I can't comment.

Telescope was up next, here is a sample of their music

Then David Garibaldi and the CYMK's

He did a few other paintings as well, then ended the show with David painting a picture inspired by the Shadow's Foundation logo along with live music from Telescope. 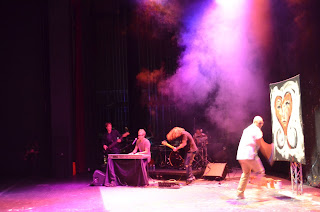 In the end it was a great night. Stay tuned for some more updates about training in Flagstaff!

Back on the Trails

I have been in Flagstaff for approx 52 hours now and I must say, I am adjusting WAY quicker this time around compared to my first experience last year. In fact, not only have I adjusted quicker, but it feels much easier this time around. Last year I had a few experiences where I felt like death and even had some lightheadedness. Not this year. Definitely much better this year! 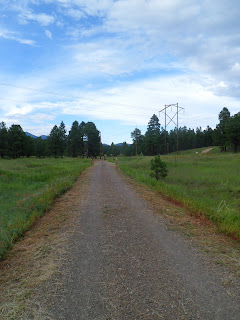 I am enjoying being back out on the trails. I am not a huge trail runner back home because simply put.... I am a train wreck on trails. Let's recap, my first ROC (Runner's of Compassion) experience (back in 2008 I believe) took me out on the trials behind Westwood. I went out with Group 1 as I figured Group 2 was too slow for me. Well, since I was an inexperienced trail runner, Group 1 was slightly too fast (and experienced) for me as I turn into a granny on the downhills.

As I tried to keep up on the decent back towards Westwood (sorry trail experts, I have no idea what trail I was on as I paid no attention and just tried to keep up), there was this tree across the trail. I stepped up on the tree and pushed off. All good right? Nope, not for this disaster. As I pushed off, my foot slipped on the wet bark and I did a half spin in the air to land parallel to said tree. All good right? Sure, it would have been, if I had maybe been quick enough to get my hands down. Nope, this all star did not get her hands down and instead took the trail with her face. Imagine, pine needles up the nose.

I guess I made a loud enough thud and a few curse words that the guy in front of me stopped and came back. My face was throbbing as I wiped the pine needles out of my nose and off my face. I think there might have been a little blood but not a lot. I believe I was asked what I wanted to do. It would have been quite the hike back down to my car, so of course I finished the run. Long story short, I ended up with a slightly crooked nose (sinus issues that still plague me) and a lovely black eye just in time for my boyfriends birthday.

Oh that is just one story. How about the story where I was running in Hemer Park, this time with my iPod in my hand (back when I ran with music). Same year I think. Sun and Shade played games with my eyes and I tripped on a root. Yep, again couldn't get my hands down. I didn't want to lose/break my iPod of course. Took out my shoulder on that one. No less than 15-20 minutes later on a downhill on the other side of the park I rolled my ankle. Pretty sure I sat and cried on the trail briefly before walking about 30 minutes home.

Or the time at Morrell, where I slipped on my last step after a wooden bridge and took out the side of my face on the cement pad at the end of the bridge. Basically you get the point. Erin = Trail Train Wreck!

Here it is different though. The trails don't seem quite as technical, at least not the ones I am on. I am still a granny on the rocky sections, but to me I would rather be a granny than hurt myself. I have been shown some new trails that I never realized were so accessible last year. I am looking forward to the rest of my time here. I have plenty of trail touring to go and I have some great tour guides. I do near 100% of my training alone back home, so it is nice to have some company on my runs and to also receive some important feedback while running from a valued source from home.

This is only the start. I am very thankful to be here again and cannot wait to see how this training (plus all training put in earlier this summer) pays off this fall. Big things are coming my way! 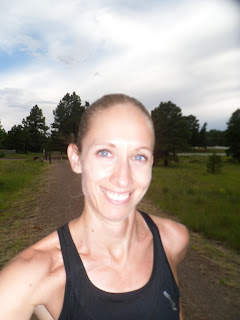 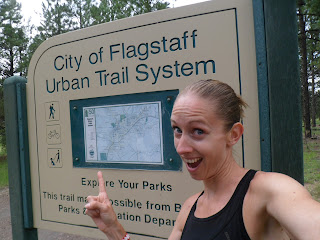 Hello from the airplane. I find myself on a US Airways flight to Phoenix and then onto Flagstaff without a tv screen. I guess I have been too spoiled with Air Canada and West Jet flights. It’s funny how even those airlines look more “posh” than this airline, even though they are still somewhat bare minimal. I have been watching downloaded tv shows, but decided to take a break to start a blog post as I haven not updated since my last race in July.


Some of you reading will be a bit surprise to find out I am on my way to Flagstaff as I have been somewhat hush hush about this trip. A few of you knew, but I didn’t really “advertise” it much. I was fortunate enough to receive some funding from Nanaimo Sport Achievement awards this year in which paid for a good chunk of my trip.


Since Summerfast, my training has picked up in intensity quite a bit. Everything has been going well and my workouts are still pretty strong even though they are done on tired legs. I have had a few huge workouts that have been definite confidence boosters and after adding in this stint in Flagstaff, I am hoping for a strong fall season.


Races are scheduled in already, but only in pencil at this time. I have ideas and “plans” for certain races, but as any runner knows, things can happen and plans can change. Since they are still in pencil, I don’t plan to make any formal announcements as of yet, though I can tell you that one race is scheduled in ink. I can confirm I will be running for Team BC this September at the National 10km Championships in Toronto (aka Toronto Zoo Run). I had the pleasure of making the team last year as a few of the top 4 Timex finishers turned down their invitations for the team. This year, I earned my spot by finishing 2nd in the Timex Series, ensuring my spot on the team.


Zoo Run is a race for place as it is not known to be the fastest course. Simply think of the name (Zoo Run) and you should understand (aka running a race inside an actual zoo). Yes Giraffes, Zebra’s you name it, all line the course, though last year I didn’t really notice any of the animals until the cool down after the race. This year they have apparently altered the course again. This seems to be a yearly thing as they try and improve the course and of course also deal with changes in the actual zoo. I look forward to the trip in a months’ time.


In the meantime, I still have plenty of hard training to go. Let the fun begin!!
Posted by Erin at 8:32 PM No comments: