I recently took part in the Oasis Zoo Run which took place around and within the Toronto Zoo. I was lucky enough to claim a spot on Team BC after someone else backed out, so I thank them for giving me the opportunity to try this race. It was a goal to try and make it to this race this year; however, I fell short in that goal by finishing 6th in the Timex Race Series. You see the top 4 automatically qualify. In the end, 2 people turned down their spots, which allowed myself and Katherine Moore to attend.


Team BC Women the night before the race (myself, Katherine Moore, Sabrina Wilkie, Natasha Fraser) 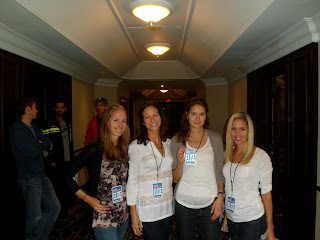 I didn't go into this race expecting my best time as I was well aware that the course was slow with the amount of rolling hills and sharp corners within the zoo. I went into the race wanting to run the strongest race I could and to hopefully hit sub 37'. This year they had a new course, which was a point to point course both starting and finishing in different spots than previous years.

The start was a bit of a jumble as the elites were trying to sort out getting their bags to the finish. In the end, with a run across the parking lot to drop the bag and back to the start, we were on the line and ready to go. The race started out fast as the first km was pretty much all downhill; however, what goes down must come up as just after the first km we had a hairpin turn to head back up the long steady climb for another km. I think it was just after 3km that we had our second hairpin turn. I hate these turns as they cause you to lose too much speed.

Up until this point, 3 of team BC women (Sabrina, Katherine and myself) were pretty close together with Natasha way up with the leaders. I fell off Sabrina after the 2nd hairpin as we entered the zoo and took a dirt service road. Nothing like a dirt road with mud puddles in a road race!

Most of the middle of the race was a blur. It started to hurt but I kept pushing the best I could. I hit the 5km mats and was thankful it was halfway done. I think it was around 7km another female passed me and muttered some encouraging words to me. I tried to hang on but she gapped me slightly (maybe by 5-10m). Around 8km we had a downhill where she gapped me a bit further but not by much (I really need to learn how to run downhill), but thankfully I realized that every time we hit a hill, I would gain on her. 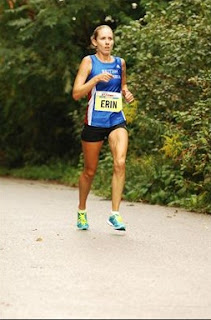 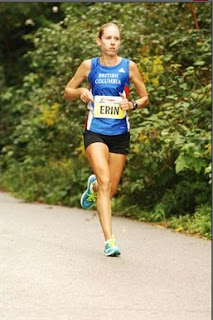 At 9km we had a steep hill to climb and I made my move as she was suffering. I passed her as we were 3/4 of the way up and then tried to hang on for dear life on the short flat/downhill before the final climb to the finish. Thankfully we previewed a bit of the course the day before so while I didn't know the exact location of the finish, I knew it finished with a decent hill climb. I knew if I could stay ahead until the hill that I would keep my position.

I crested the hill and saw the clock over 37' and was a bit disappointed. I never once looked at my watch the entire way throughout the race so I had no idea what to expect. In the end my gun time was 37:19 (37:18) chip. In the end I finished 48th overall and 15th female while putting 13 seconds on the 16th female within the final km. 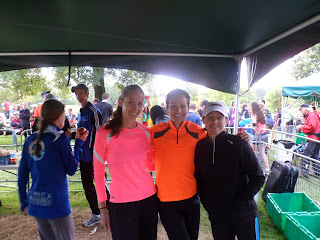 The cool down was a tad crazy as we basically ran with other racers and it was interesting to hear many comments that while they advertised the race being "faster" this year a majority stated that they disagreed and thought that the course was actually slower. Having never run the previous courses, I have no idea whether that was true or not. 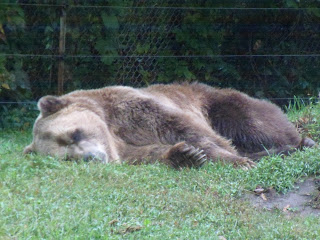 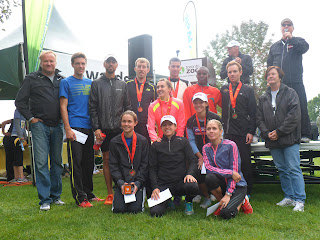 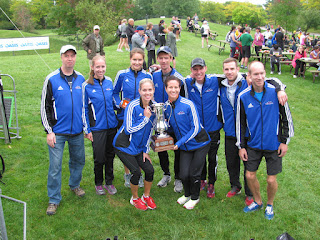 Natasha and I were roomies and we figured out we began racing each other 18+ years ago. 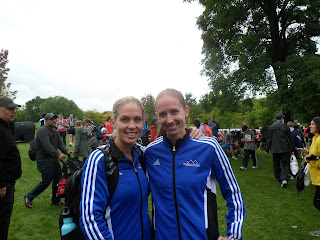 Myself and Michelle Stillwell at the Nanaimo airport after a long day of travel! She was in Toronto for the Olympic Parade of athletes! 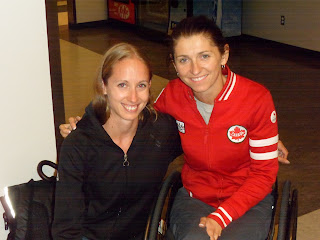 Before leaving for altitude, the idea of running the Victoria Track Series 10,000 was thrown out in the open. We figured it would be ideal to find a race after the 10 day window back at sea level and the 10,000 was pretty much the best option. A flat race, though mentally challenging.

During altitude, I was still wavering back and forth as to whether or not I wanted to run it. It wasn't the distance I was worried about, it was simply the amount of laps in the race (25). It was also due to the fact that it was a mixed race with people running anywhere from 30-40'. In essence, I was afraid of being lapped 4+ times by the leaders including my own coach.

Average runs following altitude, not to mention some slower workouts post altitude compared to pre altitude, I decided to commit and just go for it. I sent my confirmation to Chris hoping that I wouldn't regret it.

Saturday was a long day. The race didn't start until 8pm down in Victoria. It's about a 90' drive south so I had all day to wait around until I finally left shortly after 4:30pm. Long weekend traffic on the way down was a joy, especially because the police tend to be out in full force on holiday weekends.

I arrived down at the track shortly after 6pm and just hung around chatting with people. The sun started to go down and it got cold. Not to mention there was a decent wind going through the stadium. By the time I started my warm up after 7, I was literally shaking from being cold. I even warmed up in a thicker jacket! Thankfully, once you start moving it wasn't too bad overall.

Shortly before 8pm we were on the line, big names included Kevin Friesen, Matt Clout, Jerry Ziak, Sean Chester, Bruce Deacon, Craig Odermatt, plus Natasha Fraser, Marilyn Arsenault, Lucy Smith, Katherine Moore and Kristin Smart for the women. In fact that was all of the women, 6 total.

The gun went off and soon I found myself in a pack with Katherine and Kristin. We stayed that way for a few laps and then Kristin fell off pace. At about 3km, I passed Katherine and hoped that she would follow me as she graciously took the lead for the first bit. I figured it was my turn to lead for a bit. I am not sure how long she hung on behind me, but it soon became quiet.

Slowly the laps ticked off. It only took a few laps for the leaders to lap me for the first time. I concentrated on keeping pace but really had no idea where I was time wise. I attempted to take km splits; however, that lasted until 4km, then I lost track of where the km's were. I guess I should have just taken lap splits. Oh well.

I remember just wanting to get to half way and once there, I wanted to get to single digits. Once I hit that, I concentrated on getting to 7.5 laps which meant 3000m left (a race I have done many times as a teenager). Then I concentrated on 5 laps left, at which point I heard 29:11 for 8km and I thought to myself. Sweet a nice 20 second personal best mid race. As I came around with 4 laps left, Kevin Friesen lapped me again right at the line as he was finishing in 30:39.

After that I concentrated on each lap, 3 laps left. When I came around with 2 left, the official looked at me and shrugged his shoulders. He had no idea how many laps I had left, which didn't surprise me as he hadn't given me a lap count since about 16 laps left. Thankfully I kept track myself. I came around with 1 to go and it was announced that I was finishing. That would have been real nice; however, I would have finished around 35' and as nice as that would be, I am not in that kind of shape (yet). I kept going and feel as though I picked it up my last lap and even gave a pretty decent sprint to the line to finish in 36:20 for 4th female.

Turns out I ran a 24" personal best from my April 10km at the Sun Run (net downhill) which was 36:44. I was happy, but honestly wasn't spent. I feel as though I worked hard, but I wasn't nearly collapsing at the line or gasping for air etc. Did I have more? Hard to say. I do know that I ran alone from pretty much 3km, other than me either getting lapped or lapping someone else. I will take it and I know that 35:xx is within reach.

Unfortunately, the miscount of the laps did end up harming some as there were a few who ran only 24 laps, 1 who is pretty sure he ran 26 and another who says for 3 laps they thought it was their last lap. The results are off for some but are listed here.

I was pretty nervous going into the race only due to the fact I didn't know how I would find the 25 laps round and round; however, it honestly wasn't as bad as I thought it was going to be. I felt strong the entire time which was encouraging! Congrats to winner's Kevin Friesen (30:39) and Natasha Fraser (33:44).
Posted by Erin at 10:49 PM 1 comment:

The last few days of my trip were filled not only with running, but visits to Sedona and the Grand Canyon. I had planned to post about these trips when I got home (I may still do so); however, life (aka reality) got in the way. The days after getting home were filled with running errands such as grocery and laundry and then returning to work. My co-worker who works opposite shifts as me has called in sick since I got back, so that has resulted in me working extra shifts. Let's just say my idea of going back to work wasn't going to be working 7 out of 8 days. But it doesn't stop there. I now have 2 days off because I turned down a shift tonight due to plans, but then I return back next week to work 6 out of 7. Yay work!

Running has been average since returning home. The training at altitude caught up with my legs and while runs weren't terrible, they weren't flying either. I have been told that is normal. I briefly flew on day 3, but from the sounds of it, what I felt between day 4 and 10 was normal. Today is day 11 and I am heading to Victoria tonight to race a 10,000m on the UVic track. Answer me this.... am I crazy?

You see, this girl has never raced further than 3000m on the track. For non track people that is 7.5 laps. Never even a 5000m. Yet here I am jumping into a 10,000m which is 25 freaking laps! Am I nervous about it? Yes. I would totally rather run 10km on the roads; however, this is merely a race to see how I react after altitude. It's not an important race, just one I am doing for experience. Will keep you updated.

In the meantime, round and round I go!
Posted by Erin at 10:49 AM No comments: