This summer the train has been packed full of athletes that have been unable to do what they love, which of course is to run. There was Natasha Wodak, Krista DuChene, Reid Coolsaet, more recently Dylan Wykes and myself. Yes there, I admitted it. This summer has truly sucked. I was injured. All aboard the freaking Injury Train.

You might recall me talking about having a less than ideal race in Ottawa back at the end of May. A few weeks after the Montreal Half Marathon, I had some lower leg pain.  While my main Chiro Dr. Abe Avender was out of town, he set me up with some laser treatments at Island Optimal. It didn’t appear to be bone related, but the issue hung around a few weeks. Leading into Ottawa it did start to get better so that was a good sign. I went to Ottawa hopeful that I could run a good one. Instead I was left with flat legs.

Well apparently that was likely due to a stress fracture in my pelvis that came out of nowhere (I cannot recall any warning signs prior to this). I didn’t realize it at the time, though post race I found that I now had some issues when standing on one leg putting my warm ups on. I just figured my SI Joint was locked up again as that is what it felt like to me. I had the following day off and flew home that day. The next 2 days I was able to run without any real issues, though my lower back/SI still felt funny. Getting dressed still bothered me as well. I already had an appointment with Abe set up for the Wednesday afternoon.

Well Wednesday morning I went out for a simple 50 minute run and signs told me within minutes not to run, but me being stubborn I kept going and thought that if it wasn’t better in 5 minutes I would stop. It got better. I kept going. That was until half way when I pretty much broke. I still had 4km to get home. I debated walking, but I had a meeting to get to and not enough time to walk home and make that meeting. I debated hitchhiking, but then who knows how safe that is.

An undercover cop drove by, but I didn’t realize it until it was too late to flag him down. I went by the house of a former high school classmate, but I hadn’t really talked to this person in forever, other than a hello or wave whenever he was outside in his yard. I went by a coworker’s house, but I had no idea if he was home and I figured at that time I was only 2km to home so I may as well keep going. It was a slow hobble home, a quick shower and off to my meeting. I could not focus as it hurt to move, but I made it through the meeting barely.

I got home and messaged Abe telling him I was debating going to the ER as I was in so much pain. We decided to go into the appointment and Abe would have a look first. I went to see Abe. I cried. I have since apologized, but it was a mix of emotions. Not only was I in so much pain every time I moved, it was also the realization that I screwed up and that I was injured because I didn’t stop in those first few minutes of the run that morning. I realize now that I was probably already injured prior to that, just made it a bit worse with the run. It was decided that I would go to the ER and I was given instructions on what to ask for.

I hobbled into the ER and the wait wasn’t too bad. I think I spent around 3-4 hours there. I confused the ER doctors. They did an X-Ray, but it didn’t show anything (I was given my results via Abe 30 whole minutes before the ER doctors got back to me). I was instructed to ask for a CT Scan, but the ER doctors wouldn’t do it. “Too young, too close to reproductive organs, we won’t do it.” Eventually I left with them telling me they requested an MRI and they put a rush on it but they didn’t know how long it would be. I hobbled out of the ER. The guy sitting in his truck at the bottom of the stairs would have witnessed a HUGE range of facial expressions as I walked down the stairs to my own truck.

I headed home for the couch and the next 5 days were spent basically on the couch and in bed, other than when I had to visit the doctor to get a doctors note because my work needed it to give me the weekend off. I also hit a physio on the Friday morning and he figured that it likely wasn’t a fracture and was probably muscle but he too was confused. Back home on the couch everything hurt. Every movement was brutal. Standing up, changing position, rolling from side to back and even sneezing were brutal. Oh goodness, sneezing was the worst (of course I had more fun with sneezing when the hernia popped up at the end of July).

After about 5 days I was able to move with more ease and less pain. A week after visiting the ER I went back to work.  Coach and I decided the season was over, rather than holding off 3 more weeks to do the BC 5km Championships. We would do the end of season break now and see what happens. I took the time off. The next 6 weeks were a blur. I had a few attempts at running, pool running and biking, all of which were a total failure. I saw a different physio who diagnosed me as having an nerve issue. That diagnosis changed into a hamstring issue. Strength exercises hurt but I was instructed to work through them so I did.

Finally I got my MRI date of July 9th. I went in for the test and unfortunately had a few issues lying still. I guess my restless body wanted to twitch galore so the tests took a bit longer as they had to re-do a few of them. Why does one twitch even more after you tell yourself to really concentrate on lying still? Right after the MRI, I was told the radiologist wanted to talk to me. I got dressed and walked into his office and I said “it’s a stress fracture isn’t it” to which he replied “yes.” He proceeded to show me the images and explain everything. While I was grateful to have the diagnosis finally, I was heartbroken. This radiologist just crushed my dreams even though deep down I knew it was a stress fracture. I even told my work in those initial days that it felt like I fractured my ass.

There I had it, diagnosis of a stress fracture (which showed some healing) in the left inferior pubic ramus with a stress reaction in the left acetabulum. FML. Goodbye fall.

Needless to say, it was a long long summer. Slowly word got around that I was injured. Some I told, some found out from others. I didn’t intend to hide it from anyone, but I also didn’t want to become the local gossip especially when I had no idea what the injury was in the first place. I dodged questions of training and racing. I quite simply did not want to talk about it. I was upset, I was mad, I was heartbroken. It’s awfully hard to sit on the sidelines and have people complain to you about how unfortunate it was they had to do a workout when they didn’t want to or how it was too hot outside to run. It isn’t until you are injured that you realize how silly these complaints are when there are people who would give anything to run. I apologize to ANY injured runner for when I have complained about a slow race time, bad workout, bad weather or quite simply whenever I complained about ANYTHING running related.

After getting the official diagnosis, I got hooked up with a local Sports Doctor who has been great. Dr.Goodall requested a ton of tests. So to answer anyone’s question as to whether I am too skinny and/or whether or not I get my period, I want you to know that EVERYTHING is fine in that regard. I had thyroid tests, glucose tests, hormone tests, vitamin tests. I can’t even remember them all. The ONLY test I came back low on (and by only 1 point) was Vitamin D other than my usual low normal ferritin and iron.

After seeing Goodall, I was approved for the pool so I went at it whenever I could. I think I was at my sisters for a weekend at one point, but I got in a good 10 days and then popped that darn hernia while at work. So the stress fracture happened around Ottawa which was May 24th and I went to the ER on May 28th. The hernia came on July 30th; more than 2 months later with minimal activity which means neither are related to one another.

Here in September I am now somewhat back into running, with a lot of lost fitness. My fall goals went down the drain months ago so at this point it is onwards to 2015!

Spending lots of time getting to know the local lifeguards! 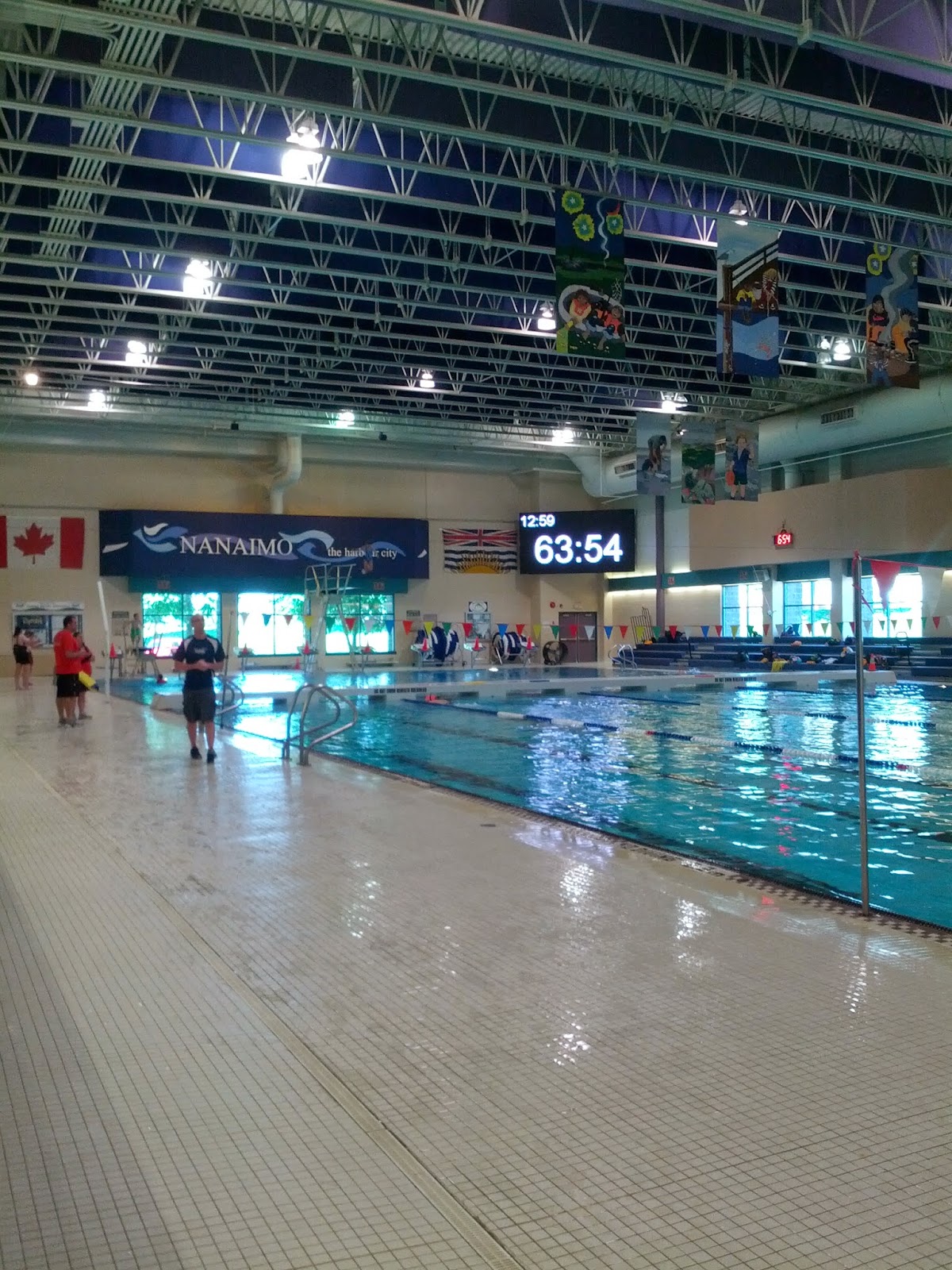