Labour Day weekend meant I found myself on a Greyhound bus up to Kelowna to take part in the Wine Country Half Marathon. I am ever so grateful for Eric and Barb who agreed to take me into their house for the weekend. Not only did they feed me and give me a place to lay my head, but they picked me up from the Greyhound station, took me to pick up my race number along with a course tour, drove me to and from the 7am race (they also generously volunteered at aide station #4) but to top it all off they drove me to the airport for my 6:15am flight the day after the race! Thankfully I could pay them back with a HUGE 1500ml bottle of wine that I won!

To be honest I was fighting a few nagging issues going into the race so I wasn't sure how it was going to go. In fact, the Thursday before I left, I had some X-Rays done. I was supposed to hear back on Friday whether they were clear or not, but alas, no call received. Coach Matt had strict instructions NOT to kill myself in this race and not to make anything worse. I was instructed to cruise any downhill and not to throw myself down them. Basically, the goal was to race but not to come out injured.

Any injury sucks of course, but the real reason not to come out injured was because the day following the race I was scheduled for a 3 week altitude training stint in Flagstaff Arizona. We didn't want that to go to waste by injuring myself in this race. The race was done so that I could get in a half marathon effort prior to my upcoming marathon debut. Yep a marathon. Eek.

The pre-race shake out the day before was okay. I tend to always feel like junk going into a race. I guess the body likes to play mind games sometimes, isn't that nice? Race morning I was up early (4:45am) and had a light breakfast before heading to the start for 6am. It was chilly and breezy up at the Vibrant Winery where the race started. Planning on racing in my Asics kit, crop top and buns I initially thought I was going to freeze my butt off; however, thankfully once I started my warm up (in gloves for the first time since last winter) I realized the temperature was going to be perfect.

I wanted one last potty stop before the race, but took one look at the line up and realized that I was going to have to hold it. On the start line I lined up next to Kim Doerksen (2 time winner of the race) and we chatted while trying to stay warm on the line. A quick hello and good luck was said to my friend from home (who lives in Calgary) Kim Johnson who was completing her first official half marathon and then it was game time.

The countdown ended and off we went. The first few km's went on a different route than I realized. Unless we did drive it and I never noticed, but no big deal. I found myself in about 4th or 5th with Jan Heuninck and Kim D right with me and a guy with the name Clark on the back of his Black Lungs Toronto singlet. I found out later it was Dave Clark whom I would run the first half of the race with. 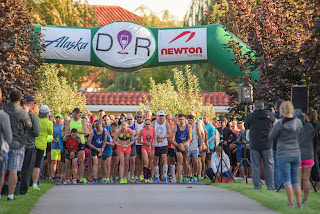 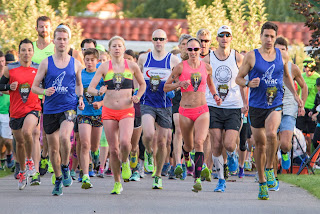 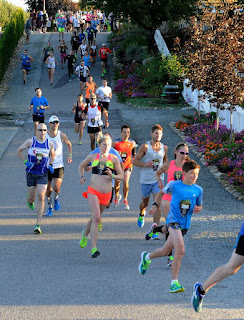 After a few km's it was just Dave and me with the leaders of the race gaining ground on us. The first 10km of the race or so is a lot of rollers through the orchards and vineyards. Some downs with some freaking nasty ups. The ups were certainly starting to wear out my legs.

Dave and I went back and forth throughout the hills 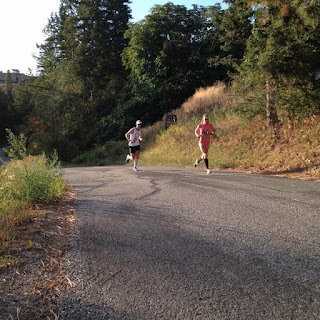 After about just over 10km we hit the big downhill and this was where Dave really gained some ground on me. I 100% am not a downhill runner. As much as I try to convince myself I am, I am not. This body does not like to feel out of control. I had Kaela with me on the ElliptiGO and I actually said I wanted to trade places with her. 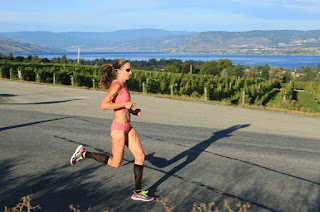 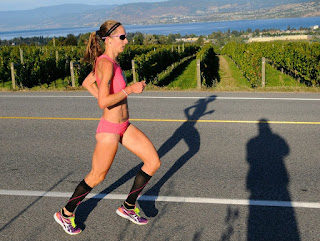 It was at least 1.5km probably of straight downhill which just KILLED my quads. When I hit the bottom of the hill (12km) I had some great cheers from the Relay participants waiting for their turn to run. This was also where they had the timing mat (the results show a 10km split, but it is more like 12km). From there we hit the Greenway Trail which was harder packed gravel/dirt. By coaches instruction this was the point I was supposed to try and pick it up for a strong finish. My quads however, definitely felt the downhill and felt shaky.

I felt like I found as best of a running grove as possible along here, took my gel and even took a few steps to the side to throw my gel pack in a garbage can (yep environmentally friendly here). From there we hit the lake and were running along a bike path. A lot of twists and turns through neighbourhoods and Kaela was going great at cheering me on. Apparently I made her laugh as at one point she asked me if I was on pace for my goal. I responded with "I came here to win" or something like that.

In the last portion of the race I was starting to reel Dave back in, I just simply couldn't catch him in time (he finished 6 seconds ahead of me). 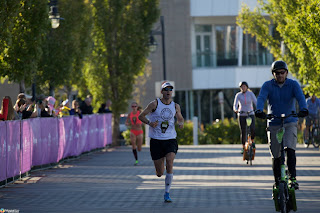 I came into the finish stretch and saw the clock clicking at 1:15:xx and thought to myself, holy crap I had no idea I was running that pace. Between the rollers in the first 10km and the downhill it was hard to gauge my overall pace. Not to mention I stopped looking at my watch after 2km. 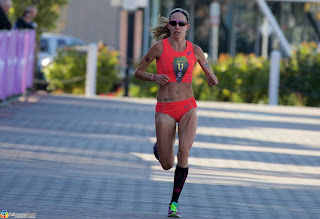 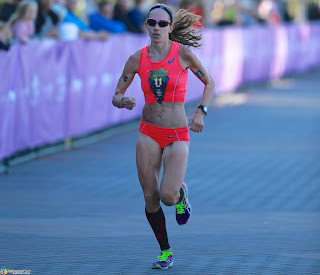 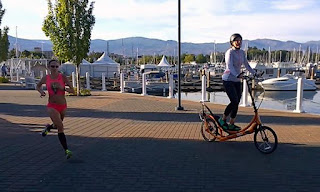 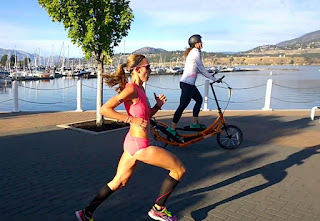 I ran a cool down, had some food and a massage, that's if you call rubbing lotion on one's legs a massage ;). Can't complain with free though. All in all it was a good day and beautiful weather in the Okanagan. Perfect for all those wine lovers who were taste testing all morning. If only I liked wine (hence why I re-gifted my 1500ml bottle of win to Barb and Eric not to mention I couldn't fly with it anyway). Overall it was a well run event and I appreciate the race organizers for having me. 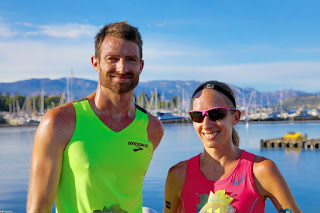 Photographer thought this was top 3, but I think this woman might have been 4th. 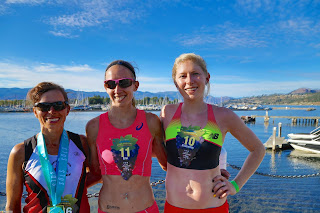 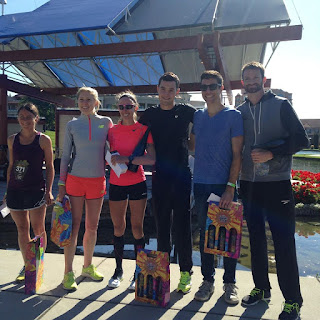 Kaela and I along with the ElliptiGO. I totally want one of these things! 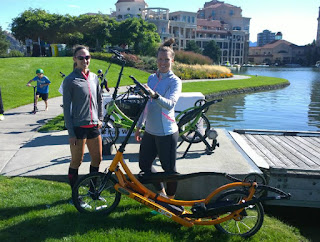 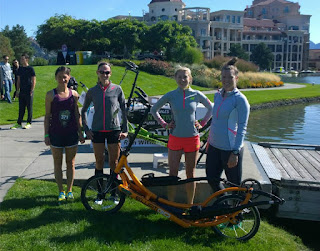 Onwards to Flagstaff.
Posted by Erin at 4:39 PM No comments:

Thanks for Nothing Medical System

Back in April while in Maui I began to have some SI pain and saw my doctor upon returning. He stressed that it was likely nothing but a crooked pelvis and locked SI so I ran the Sun Run as planned (which was in my opinion a disaster and I ended my season early). You can read about the Sun Run here and the post race debacle here.

Shortly after the Sun Run I had a bone scan done at NRGH and received word back shortly after that everything was normal. That led to much confusion as to what was going on with me. My doctor kept stating it was because my pelvis was crooked yet I kept telling him that there was more going on. I took my 2 week end of season break and attempted to come back running but things still felt off so after 10 days I stopped again and hit the pool. I blogged that it was about 6 weeks until I returned to running as I slowly worked into it again.

Things since then have been progressing quite well. Summerfast was decent for my first race back and training has been going quite well as I have been getting fitter each week. That brings me to today (almost an hour ago), when I missed a phone call and saw I had a voicemail. I checked the voicemail and heard my doctors voice and this is what I heard.

"Hi Erin, this is Dr. Goodall calling. I got a call today from Dr Sheriff. . They were looking at some of the bone scans they had done this year for a study they were doing. He noticed that the scan you had done on April 23rd 2015 did in fact show a small evidence stress fracture in your right pubic ramus. I was just phoning to see if it has resolved or if it was still bothering you. We kind of already knew about that as it seemed to be there clinically. If you want to come talk to me or have more test done please give the office a call."

Umm WTF? It would have been nice to have been told this back in April and not be told that the scans were FREAKING CLEAR. Really nice to find this out in September, nearly 4 and a half freaking months later. I do remember reading about pubic ramus stress fractures a year ago and kind of remember reading how it is common to get a second stress fracture in the opposite side when dealing with the pubic ramus but I could be wrong.

And yes, I will be calling the doctors office tomorrow morning. Stay tuned.

PS. I should point out that I have no pains in either stress fracture site and am still training towards my fall race goals.
Posted by Erin at 6:39 PM No comments: