Well I made it through the break successfully and was only a little whiny near the end. It's funny how you can talk about how much you want the break during training, but then when you actually are on the break, you are waiting for it to end. Upon returning from my break, the initial runs felt slightly rough. This tends to be normal for me. My body gets used to the routine of running and when I stop that, it is as though it forgets the motion. It didn’t take long to start feeling good again, and I had some pretty awesome workouts where I was just flying.

Prior to the break I had discussed possibly running the Summerfast 10km hosted by VFAC and it was decided that I could do it; however, it would be treated more so like another workout and a way to get a solid effort with others. This means, no taper and less of a chance at “fresh” feeling legs.

I headed over to Vancouver on Friday night with the company of Damian Allen. He was lucky to share the joys of the ferry and bus with me! I then headed out to hotel Watkins where I met up with Catherine Watkins and Catrin Jones arrived about 30-45 minutes after I did.

It was a somewhat late night with me getting to sleep probably just after 11pm. I woke up a few times as usual throughout the night, including wide awake at 5am. I had set my alarm for 5:45. I ended up falling asleep at some point between then and when my alarm went off, I felt more groggy and tired than when I initially woke up at 5. Funny how that works eh?

I had a small breakfast and chatted with the ladies and we headed down to the start to arrive at approximately 7am (it was an 8am race start). We met up Sabrina Wilkie and Anne-Marie Madden and headed off on our warm up around the seawall. The legs felt alright, so I was optimistic that I could have a decent race.

The race start was a little cramped unfortunately, but otherwise it was a decent course with many of the twists and turns (not counting the already twisty turning seawall) within the first few km. 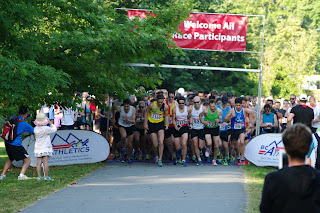 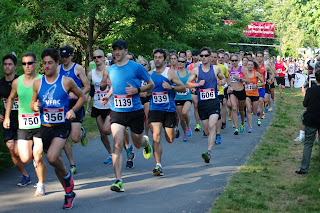 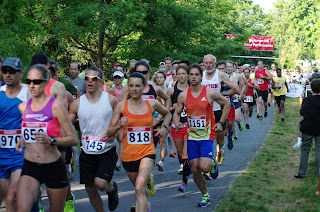 I went out and felt good, checked the watch a few times and saw I was slightly slower than I wanted to be, so I actually ended up taking the lead for the first mile. Too bad there wasn’t a mile bonus ;) Shortly after that Natasha Wodak pulled up beside me and we ran pretty even for a bit. She was using the race as a tempo and was to run it in 35:00. On the day she wasn’t challenged so she lucked out being able to tempo it and take the win!

I don’t remember the exact moment, but I think it was around 3km or so, the rest of the ladies pulled up around me including Kim Doerksen, Catrin, Catherine and Sabrina. They all ended up pulling ahead of me and I just didn’t have the legs to go with it. I think I hit the 5km marker between 17:30 and 17:40 and I already thought… hmm too slow.

The ladies kept pulling ahead and I did my best to hang on, but between 4 and 7km they had gained probably at least 40m on me. I calculated it and told myself that 6th sucks. I also thought that maybe I had already counted myself out before the race started, telling myself that I was not tapered etc.

Around 7km I started to gain back on the ladies. I think I caught Catrin before the 8km marker or around there and then I saw Catherine coming back at me, so I ended up going by her. I had no idea if I was going to be able to hold it until the end, but I went by and just kept pushing. I honestly thought that was as far as I was going to get and then within the final km I saw that Sabrina was also coming back to me and up ahead further I saw Kim who also appeared to be coming back. I kept pushing and kept thinking “good effort, but I will likely run out of time.”

Within the last few hundred meters I was back within striking distance of Sabrina. We hit the final straight stretch and I was now right behind her. I heard someone (possibly Kevin O’Connor or maybe John Hill) yell out “who wants it more” and I gave what I had left. I ended up with a 2 second lead finishing 3rd female in 35:38 (behind Natasha in 35:00 and Kim in 35:20). 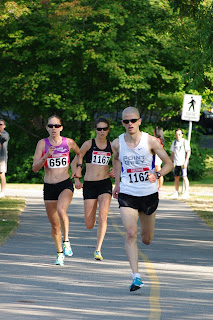 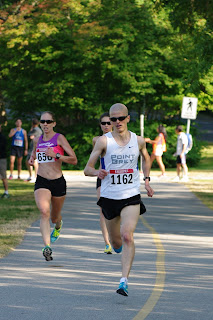 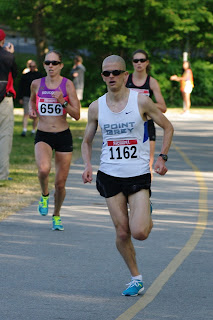 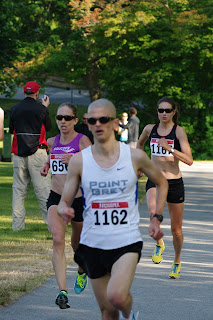 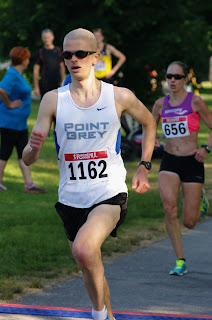 Looking back, my last km was listed at 3:23, though I stopped my watch 3 seconds after the gun time recorded, so my last km was at my 5km race pace basically. I had no km’s close to that at all, with the closest one registering in 3:30 (I had my watch set to auto lap so it didn’t match the markers exactly at the start but caught up by the end). I am not sure where that came from, but I have no doubt that I fed off the fact I was catching and had caught some of the other speedy ladies. I know I definitely had to work for this finish and was proud that I came back from the gap that was created and still existed with 3km to go.

After the race I had a brief rest and then had some more work to do. Just enough time to get in a cool down and then attend the awards. I collected my 3rd place prize from the race itself and then 2nd place prize from the Timex Series. Since I was in the top 4, along with Sabrina (1st), Catherine (3rd) and Catrin (4th) we all received automatic invites for Team BC for the National 10km Championships in September. I hope all of the ladies accept; however, even if someone doesn’t, we will definitely have another equally talented and lovely replacement.

Results can be found here.

Except these who are from Tasha's phone

Top 3 ladies (Myself, Natasha and Kim) 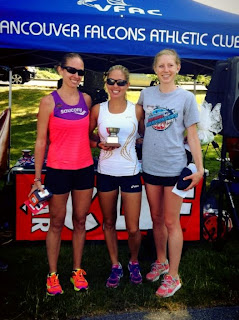 I love these girls (Natasha, Catherine and myself) 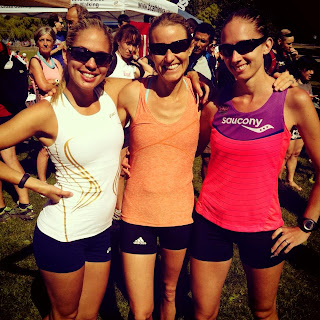