So you may be wondering about that title, well I am about to explain. This past weekend I raced the Chevron Aramco Houston Half Marathon. Prior to my marathon debut (October), coach Matt and I discussed this option as an attempt at a fast half, but then my return to running took slightly longer than expected thanks to my lovely lower back/SI. As I got back into solid training I slowly saw increases in my fitness but I wasn't sure whether I was really ready to run a decent half. As time went on, my fitness improved greatly and I was nailing some pretty good workouts so I decided that yes I would in fact head to Houston and give it a go. 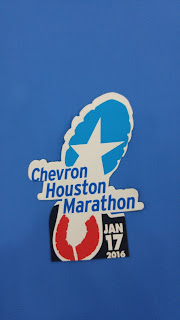 I was originally supposed to head down with a fellow runner from Ontario but by the time I confirmed that I would attend, this runner told me that unfortunately they were going to pull out. This was JUST as I was about to book my flights as I found a good deal. So instead of booking the flights, I went in search of finding new accommodations. Even though I had contacted the race organizers back at the beginning of October, they were only willing to provide me "sub elite" status which meant a free entry and the ability to start behind all of the athletes they considered elite.

Thankfully though, through the elite coordinator I was hooked up with the contact info for a local running club. I was able to get in contact with a woman named Heather, who then put out a blurb to her running club to see if anyone would be willing to host me for the weekend. I am VERY grateful that Catherine stepped up and said yes! With that being sorted out, Houston we were back on and flights were purchased (slightly higher in costs).

Just under 2 weeks before the race, I was out for a short evening run with another local runner (Melissa) and it was an extremely icy evening after a snowfall. We were running by headlamp on a paved trail that we call the Parkway Trail. I stupidly didn't notice the edge of the paved portion of the trail and my ankle decided to roll. I began quite the out of control stumble before finally putting my hands down and stopping myself. Then I proceeded to let go of a few choice words. I was able to finish the run though the ankle was not happy and was slightly swollen. 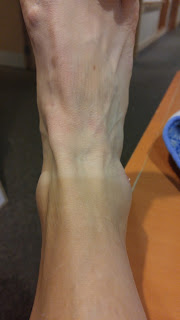 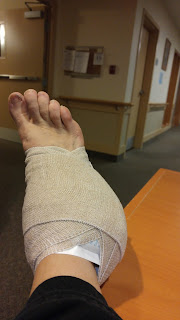 I am so glad to have such great support through Dr. Abe Avender at Island Optimal Heath and Performance. He told me to come in immediately the next day for some laser and to come in daily until Houston. I was glad to only have minimal time off (though I was able to cross train) before I was back out flying along the roads. The ankle was still slightly swollen but at least there was no pain after 24 hours. Thanks to Abe, Dr. Joe Foglia and to Geordana who all provided treatment and/or laser over the next 8 days. 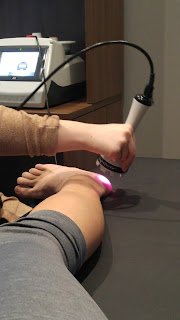 On Wednesday I headed off to Vancouver, not without incident. As my mom was driving me to the seaplane terminal, we were about 5 minutes away and I had about 10 minutes until the "Arrive 30 minutes before the flight" deadline when someone rear ended us. My first thought and I am pretty sure I said it out loud was "I don't have effing time for this." There didn't appear to be much damage visible to the eye, but we got his information anyways before rushing off to the terminal getting there just a few minutes late. Good thing there were only 2 of us on the flight. Plus my coworkers husband was my pilot so I wasn't too worried. 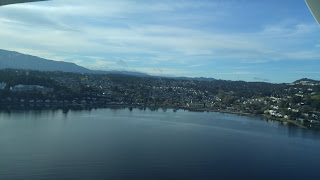 So the trip was off to a good start. I spent Wednesday night in Vancouver getting a very short visit with my nieces, sister and brother in law. 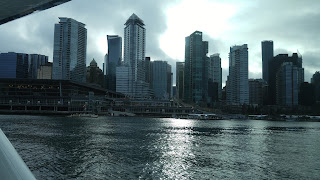 The following morning I caught a cab with Dayna Pidhoresky and her husband (and coach) Josh Seifarth at 4:30am. Wow that was early. We all had flights out of Vancouver at 6:30, both through Calgary yet I was on Westjet and they were with Air Canada.


Leaving Vancouver. Whatever that bright light is, it must be super bright in person. 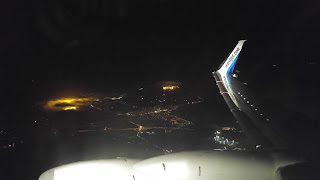 Sunrise from the plane 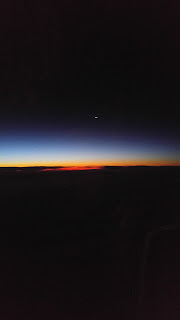 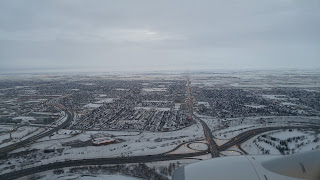 Catherine picked me up Thursday evening and we had dinner and settled in. Friday she had to work so I headed into the elite hotel to run with Dayna and Josh and then hang out the rest of the day. Saturday I visited the expo with Catherine and had a nice chat with Collen De Reuck. 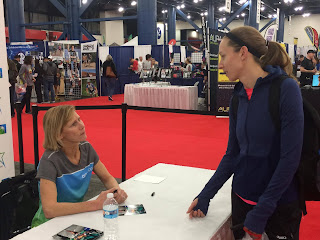 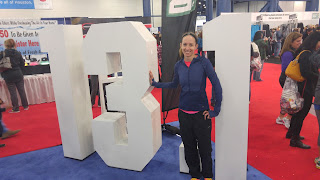 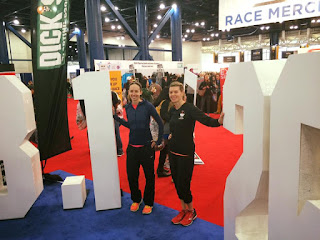 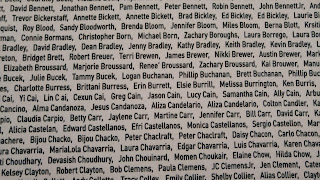 This was followed by a run from the hotel and hung out until after supper. It was nice to catch up with Krista DuChene and Rachel Hannah who were also at the hotel. Dayna and Rachel were in the marathon and Krista and I in the half. There were other Canadians in town too, such as Rob Watson and Sami Jibril both in the half.


View of the finish area from the hotel 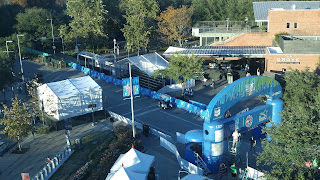 Killing time watching sunsets with these kids (Josh and Dayna) 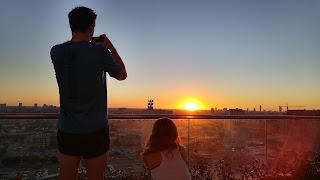 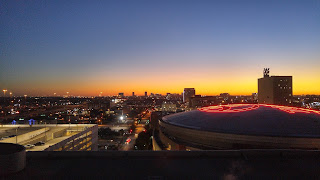 Sunday morning was an early wake up call at 4:30 which is 2:30am back home. Thankfully I didn't have any problem with time change so 4:30 felt like 4:30. We headed down early to grab parking and to drop stuff at the bag drop. This was the first time I hadn't been elite in a while. Doing the regular bag drop with no clothing drop at the start line was something new. I had to be in my corral by 6:35. I wore a few warm ups down to the corral as I planned to catch another Canadian in the elite crew to hand my stuff to in order to pass to Josh. I ended up catching Krista at around that time and then I spent the next 25 minutes in my buns and a throw away t-shirt.

The corral was only about a block long and had quite a few other athletes in there. We ran back and forth and did drills trying to keep warm. Around 6:55 they did the colour guard (or should I say color guard since it was the USA) and the national anthem. At 6:57 they removed our gate and us sub elites ran up to the start behind the elites. I was probably about 10 rows back. It took me 4 seconds to cross the start according to the results.

I had planned to find Krista, Dayna and Rachel who were going to be going out at 3:30/km or so. I could not even see them at the start. The gun went off at 7:00 and off we went, trying not to stumble over the hundreds of feet around you. After a few hundred meters or so I spotted the 3 of them over to my right and I slowly made my over to them. We ran this way for quite a few km before Dayna pulled ahead and Rachel dropped back.

Krista and I continued along together and she graciously shared a sip of her first bottle with me. We were still together at 10km and I felt strong. I had no idea what pace we were on as I wasn't paying attention to my watch. I knew the first km we were slow (3:43) and then the next km we were right on (3:30). After that, I didn't look. There were clocks along the course but I never really paid attention to them. I questioned my legs at one point around half way, but my breathing was super relaxed so I knew I was okay. 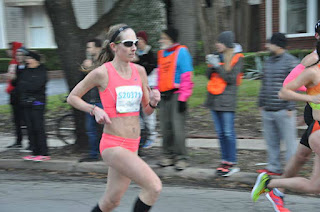 Just before 15km I started to run into trouble. Not with my legs but GI wise. This might be TMI for some people but the last 6-7km became a battle not to sh!t myself basically. For the first time ever, my inability to go before the race was coming back to haunt me. By 15km I was maybe a few seconds behind Krista. Every time the bowels acted up, I had to slightly slow down. Then the feeling would pass and I would pick it back up and get back up to the group (including Krista) only to have the feeling return. This went on 3-4 times. I eyed up the outhouses on course and nearly stopped but I thought "I don't want to ruin what might be a good time" and generally each time the outhouses were there, I felt okay. Then 500m later I was eyeing up side roads.


Unfortunately they want $75 for these photos.... yeah right. 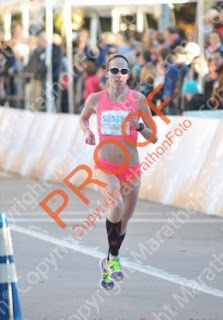 One girl came up beside me and I nearly asked her if I had already done it. I hoped I hadn't. I worried that I had. People said I would know if I did, but me having never been in that situation before, I had no idea. Finally with about a mile left, the bowels felt in control so I picked it up yet again and went with it. I was able to finish strong with my fastest km yet and even pass 3 women along the way. I will admit, I totally did a check of my behind once I finished. I am proud to say I did not sh!t myself and even with the issues I was able to finish 20th female (90th overall) with a 16 second PB in 1:14:45. I finally broke that 75' mark! Woo hoo! 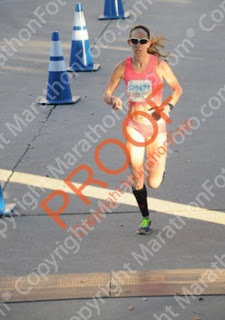 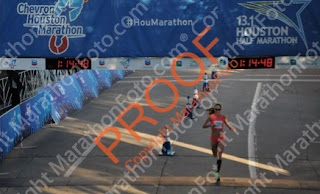 Oh and in case you are wondering, I found a washroom shortly after thanks to a lovely volunteer who gave me access to an off limits area as I was desperate. The legs felt good after the race other than 2 blisters, each on the same spot on both feet. It bodes well that there is still more in the tank. As the day went on, more and more stories came out of GI issues within the elites, whether it was bowel related or vomit related. There are questions whether the food provided on Saturday at the hotel was the cause or not. I believe the organizers are looking into the issue as too many people became ill. 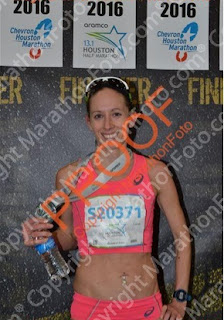 I spent Monday sleeping in and then visited the Houston Art Gallery with Catherine before my 5pm flight.


This art I get. Actually made with coffee stained sugar cubes 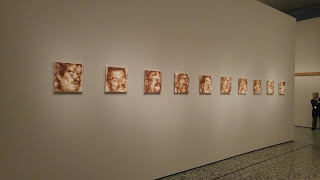 This art on the other hand, I do not get (Rothsko). 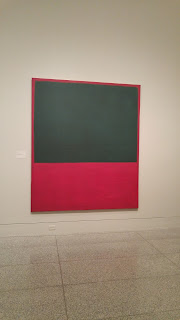 Monday night was spent in Calgary for a 13 hour layover, which allowed short visits with Trevor, Kim and Chris before flying back to the island on Tuesday morning and then straight back to work.


My house is in there somewhere 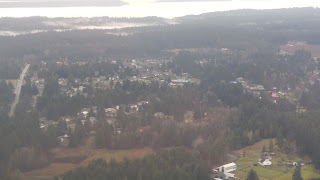 Results can be found here.

Also if you haven't checked it out already, check out this video.