Even though I had altered my training going back to the basics of tempos and hills, I decided to jump into the Longest Day 5km. It was a "who knows how this will go" type of race in which I had no expectations. My intention was to go and treat it as a hard effort and get a good workout out of it.

I headed over on the 12:45pm Tsawwassen Ferry with Mel and met up with Craig and Kris on the other side as they were coming from Victoria. Thankfully they had a car so we headed off in the lovely Vancouver traffic towards the race course. Their ferry was late, so that resulted in both ferries docking and unloading at the same time. Let's just say a little chaos and a mini rush hour way out in Tsawwassen.

We made it to the race site WELL ahead of time, I think we arrived by 4 or shortly after (the race didn't start until 6:45pm). Thankfully they had set up package pick up early, so we got our numbers, drove some of the course and then headed to Starbucks for Mel to get a coffee and to kill some time before beginning our warm up.

I was doing my drills and strides while catching up with some great runners who are currently unable to compete (Shauna and Catherine). Next thing I knew Natasha said she was heading to the start. Oh crap, here I was chatting away and totally forgot that it was a 6:45 race start. I think it was about 6:38 when I realized this. I rushed over to my stuff, quickly ditched my warm up gear, changed my shoes and ran off to the start. I had a few minutes to spare when I got there, so a few last minute strides and then on the line.

The course changed slightly from last year, apparently due to construction down the main road which used to go straight to the finish. Instead, we went down the next road, which resulted in a sharp turn to head up the final hill onto the field for the finish. Having never have run the previous course, I am not sure which was faster though Mel seemed to think last year was.

The start was downhill, which lead for a quick start. Then a slight uphill onto a flat section. I started slightly fast due to the downhill and then lost some time on the 2nd km. When that split came through I basically said "shit" and started to work my ass off to try and get back into the rhythm. I did quite well, slowly picking off people as I went. In fact, I don't remember anyone passing me from 2km going forward.

My 3rd km was right on pace and that lead me to the 4th. From 3-4km it was a slight gradual hill, getting steeper near the end. This resulted in a slightly slower km again. I was picking up ground very slowly on Katherine Moore going up the hill; however, she was far enough away that I just couldn't close the gap, especially when we crested the top and hit the slight downhill towards the finish.

A sharp corner to the right as I saw all the 10km runners lined up waiting for their start time 20 minutes after us at 7:05pm (they did 2 loops of our course basically). Down a slight hill before a really sharp left turn, up a short hill and onto the grass field. This was the first time I had actually seen my overall time. During the race I only looked at the 1st and 2nd split. When I got on the field and saw the clock at 17:45 I gave it everything I had to get across that field while watching the clock tick closer and closer to 18:00. I did not want to come that close and not succeed. My form probably went to junk, but I did not care as I crossed the line in 17:57 breaking the 18:00 barrier for the first time!

While I feel as though my effort felt faster than 17:57, I will take it. I am nowhere near training speed work or anything near 5km paced stuff. I haven't even been training half marathon pace to be honest. So it was a good sign off of my base training. 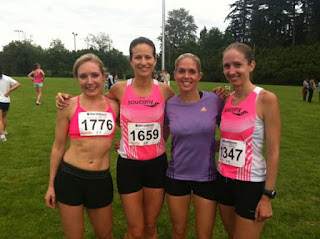 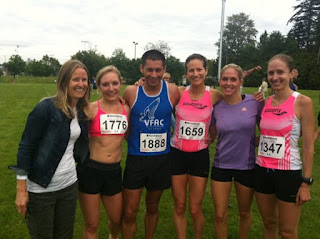 Post Oak Bay half, I took a short break followed by some short easy runs. I think it was what my body needed. A few familiar niggles have crept back into my body since Montreal and I am still keeping an eye on them. I am not in the clear yet; however, I have taken proactive measures by seeing Marcus Blumensaat in Victoria by recommendation of Marilyn Arsenault to hopefully create enough strength to rid myself of these niggles permanently (holy run on sentence, sorry).


In the last month I have spent time at 3 track meets, which included the Vancouver Island High School Championships with my NDSS kids, which saw 7 of the kids move on to the BC Championships at the start of June. Unfortunately due to work and unwilling coworkers when it came to switching shifts, I was unable to attend those Championships. I also attended the Harry Jerome meet in Vancouver and the Victoria Track Classic.


The meets certainly got the itch back into me with regarding to stepping back on the track; however, as much as I want to do that, I won't attempt it this year. Should I be able to stay injury free for another year, I may consider a few fun races next year.


Highlights of Harry Jerome was watching Jessica Smith hit the A standard in the 800 and also watching Malindi Elmore run in person. While she didn't achieve the results she was looking for due to likely jet lag, I always enjoy watching her run in person. Not to mention Natasha Wodak run a new best of 4:24, which is great considering she is mostly a dominating road runner now! 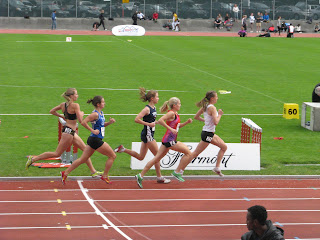 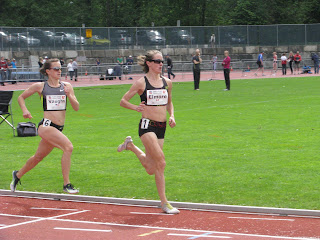 As for the Victoria Track Classic, I again enjoyed multiple races. With a former NDSS student and now UVic student Forrest Simpson breaking the 4 minute barrier in the 1500m, and current NDSS students Rebecca and Miryam Bassett running new pb's of 4:41 in the 1500. Again, it was neat watching Hilary Stellingwerff, who has already achieved A standard in the 1500, run a fast 800 for speed work. Plus Nate Brannen getting ready for his Olympic run in the 1500. Although I may not run track anymore, I did grow up in the sport and will always be a huge fan. 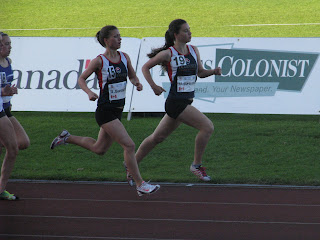 Nate Brannen going for the win 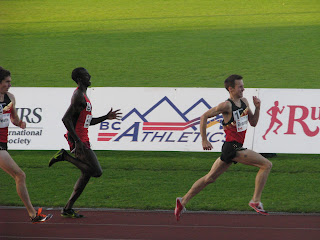 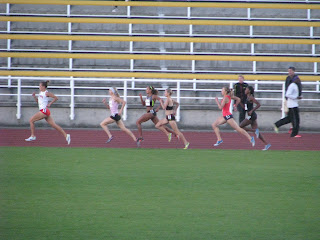 That takes me pretty much up to date. Next up, report on the Longest Day 5km from this past Friday. I think I'll make a new post though. Stay tuned, either today or tomorrow (hopefully).