At age 32 I finally had my first overnight stay at the hospital. At least from what I remember it is the first time. Just over 2 weeks ago while I was at work, I was carrying a few things that were moderately heavy when a felt something pop in my stomach followed by some pain. When I put the items down and felt my stomach, I felt a lump just above my belly button. This lump was painful to touch and it became painful to move in certain ways. I had the nurses look at it and was told not to worry about it. I only had about 1.5 hours left in my shift at that point.

When I got off work I debated going to the hospital guessing that it was a hernia, but opted to go home and sleep on it. I had a doctors appointment the next morning anyways, so figured if it was still there I would deal with it then. I saw the doctor and he confirmed it was in fact a hernia. Not a huge one thankfully, but big enough and painful enough that the doctor couldn't push it back in at his office. Instead he sent me off to NRGH and my response was "I am supposed to work today" with his response "Not anymore."  I was also told not to eat or drink anything going forward.

So I placed a call to my work to inform them and then drove myself to the hospital. This is where the long day began. They tried a warm blanket, which I knew was not going to work. Then they drugged me up with Fentanyl (did NOT like that feeling) and tried to push it back in. Again that was done without success. So I waited for the doctor to talk to the surgeon. That took hours. Finally I was told surgery would be needed, but they couldn't tell me when. This meant, continue not eating or drinking. It was at this point I wished I had stuffed my face this morning with a full breakfast rather than grabbing something quick and heading out the door intending to eat more after the appointment.

I was hooked up to an IV, saw the surgeon and then continued to wait. I wasn't waiting alone though. For the most part I spent hours waiting with another man who had ruptured his bicep at work and was also waiting to hear from a surgeon. He ended up leaving before me with his surgery being scheduled for that following Saturday (2 days later). I on the other hand waited and waited.


This does not help when hungry (it just REALLY hydrates you) 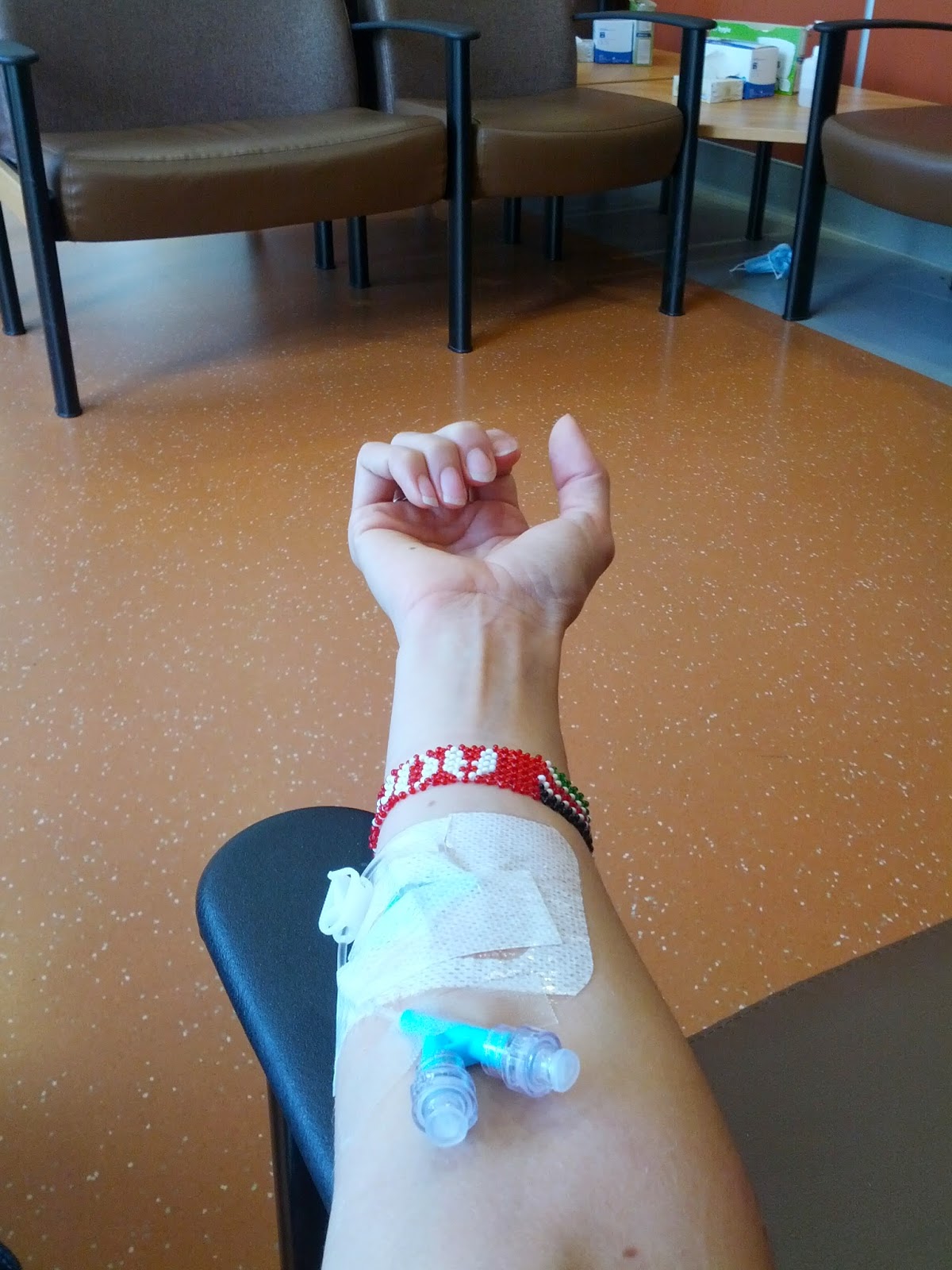 In total I spent 7.5 hours in the ER before I was finally admitted to a bed. I moved up to the 3rd floor and into a room with 3 elderly women. The nurse who took my vitals asked if I was an athlete as my heart rate was low. The other nurse who did my admitting turned out to be a former classmate from high school. The waiting game continued but at least I had a bet...... and I STILL could not eat. Oh but hey, thanks for the IV so at least I won't get thirsty. Note that the IV fluids did NOT help at all with my grumbling stomach.


Finally got a bed 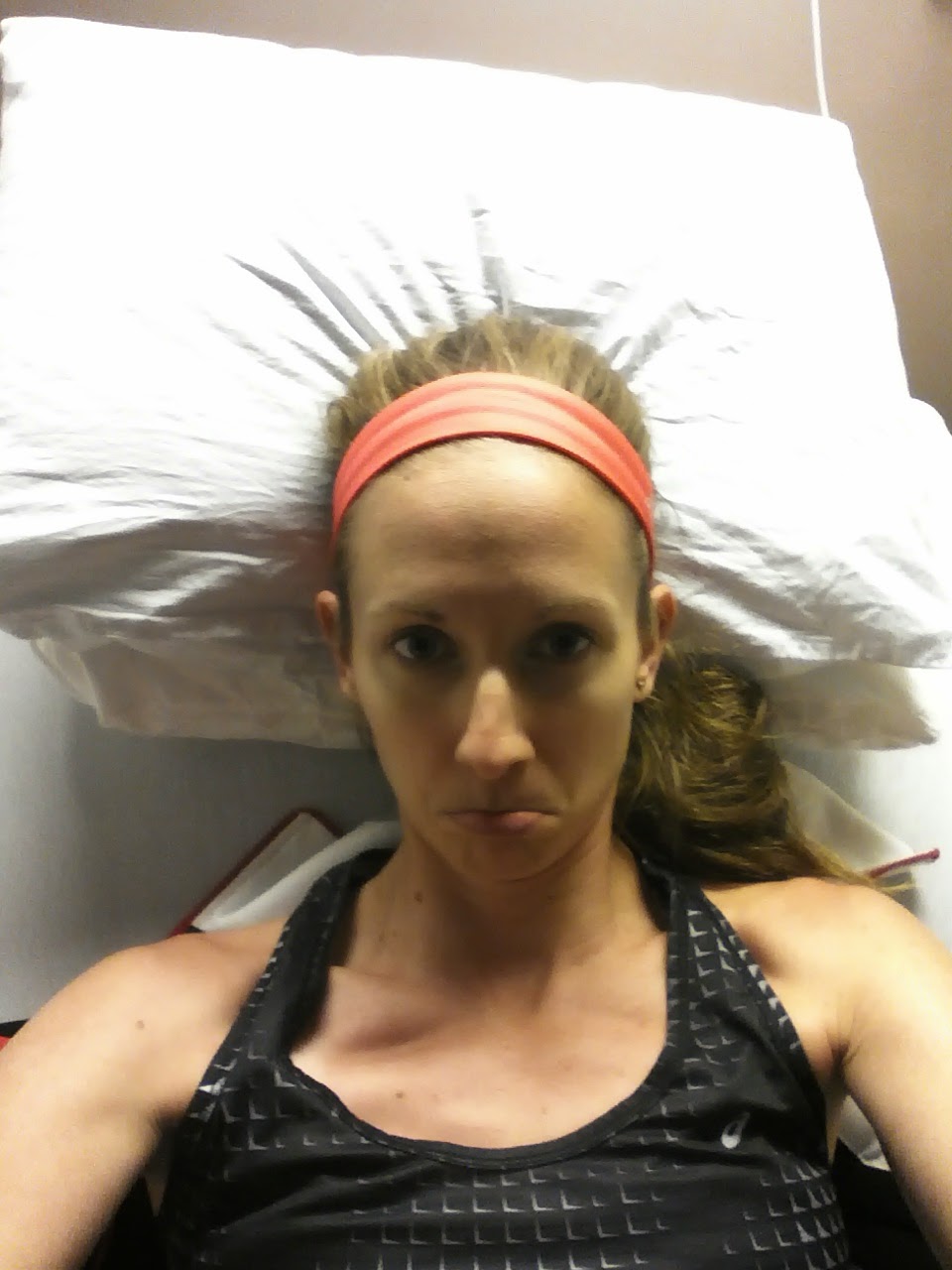 Why do they make hospital gowns so HUGE! 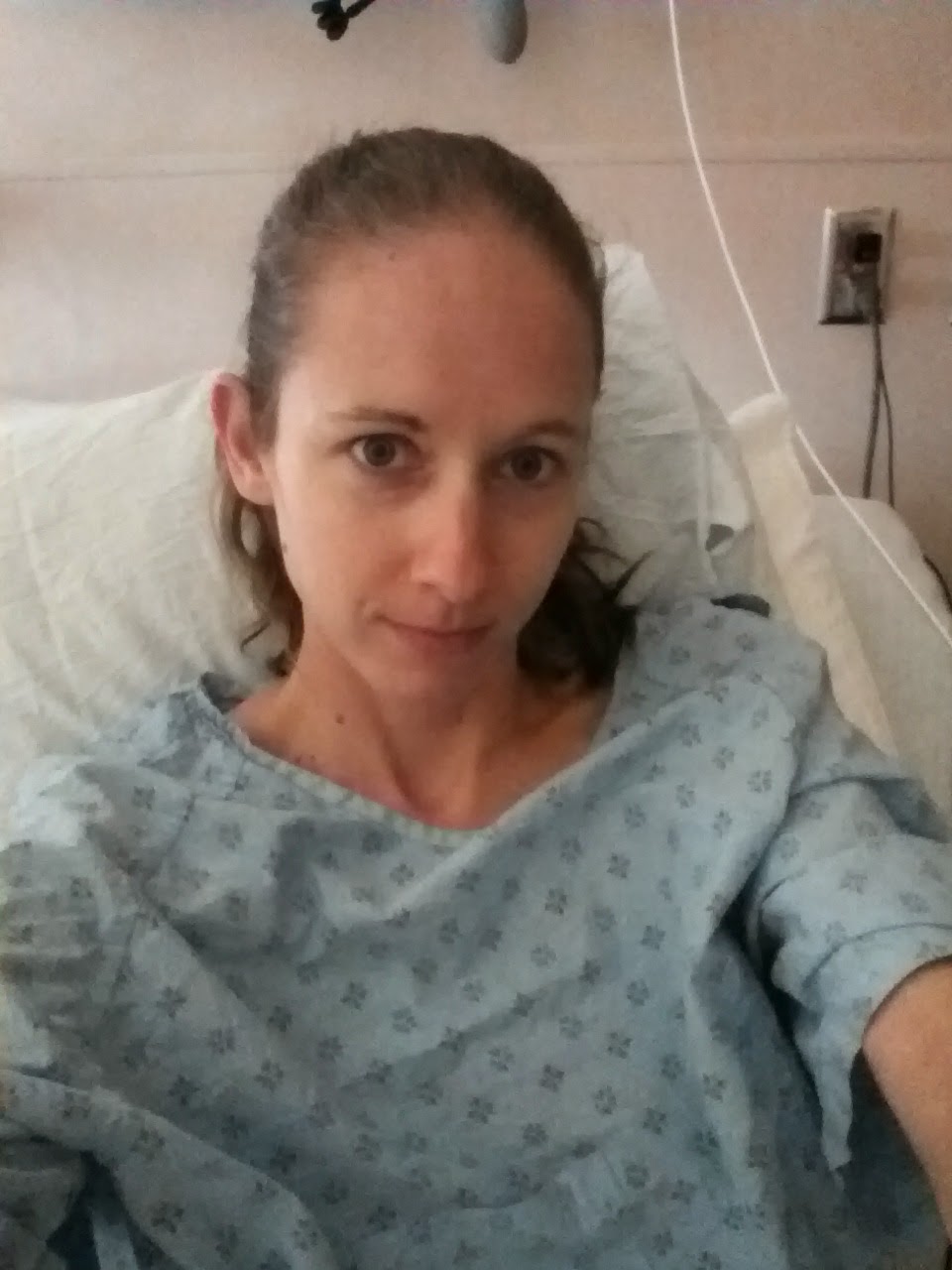 How do people sleep in the hospital? I sure as heck couldn't figure it out. With one lady grumbling in pain with every single breath, to the IV machines beeping, to people in the halls talking, to call bells ringing. I finally started to doze just after 1am only to be woken sometime between 1:15 and 1:30 as they received the call for my surgery. I believe I told the nurse "oh good I will finally be able to sleep."

Out of bed and onto another bed and wheeled down to the operating room. It was cold in there. Hooked up to the heart rate machine I listed to my heart rate bounce all over the place. I looked at the clock and it was about 2am when they put me under. It sure doesn't take long when they give you the drugs. I remember waking up in recovery between 3:15 and 3:30, dozing on and off. I remember correcting one of the nurses when I heard her call me Burnett. Hey people, there isn't an N in my last name, it's two R's. I get that often. I was wheeled back up and was in my bed again by 4am.

I was tired, I was still drugged. I was woken again at 5am, 6am and 7am for vitals. Pretty sure I was ready to tell them to piss off as I was so tired at that point. Finally after 8am they brought me what they considered breakfast. I was so excited to get food at this point, having not eaten for about 22 hours, only to be disappointed by what was put in front of me. One tiny scone, one tiny bowl of cream of wheat (they called it Oatmeal, that was not Oatmeal), one piece of cheese, one little thing of milk, one little thing of apple juice, one coffee (which I don't drink), and one little bowl of canned diced peaches. 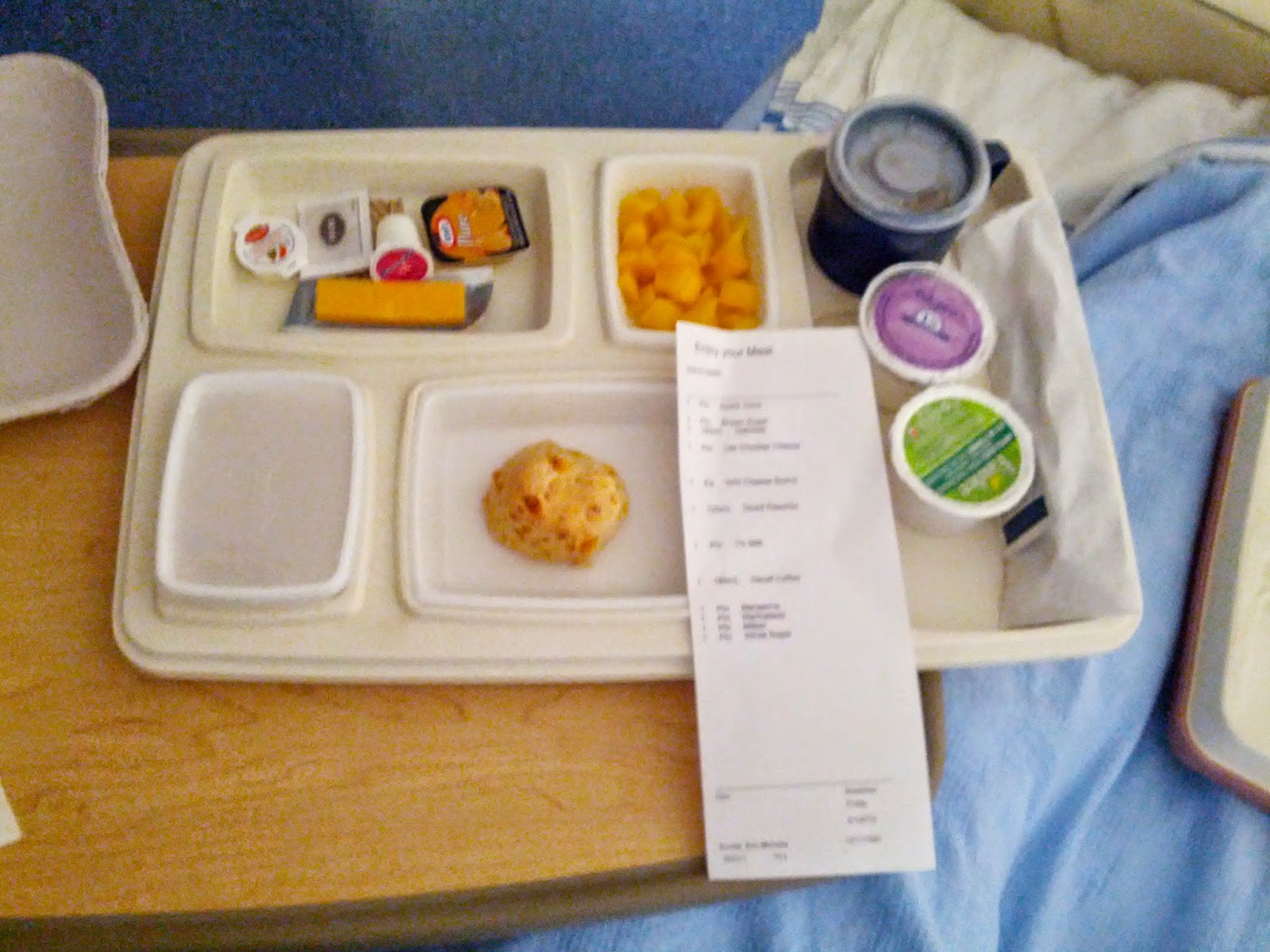 Just after 9:30am I was free and headed home. The next few days were quite rough. Abdominal surgery is no joke. 2 weeks later I am still healing, still have to layoff lifting anything too heavy but otherwise it's getting better and almost back to normal. I can now cough, sneeze and blow my nose without cringing and yelling "ouch" after. Otherwise, I have a nice scar and funky abs right now that I am not the least bit impressed with; however, it beats the pain of the hernia. Thanks to my sister who cooked me dinner and cared for me over the next week post surgery! Oh the joys of life.


I looked sunburnt because of the iodine 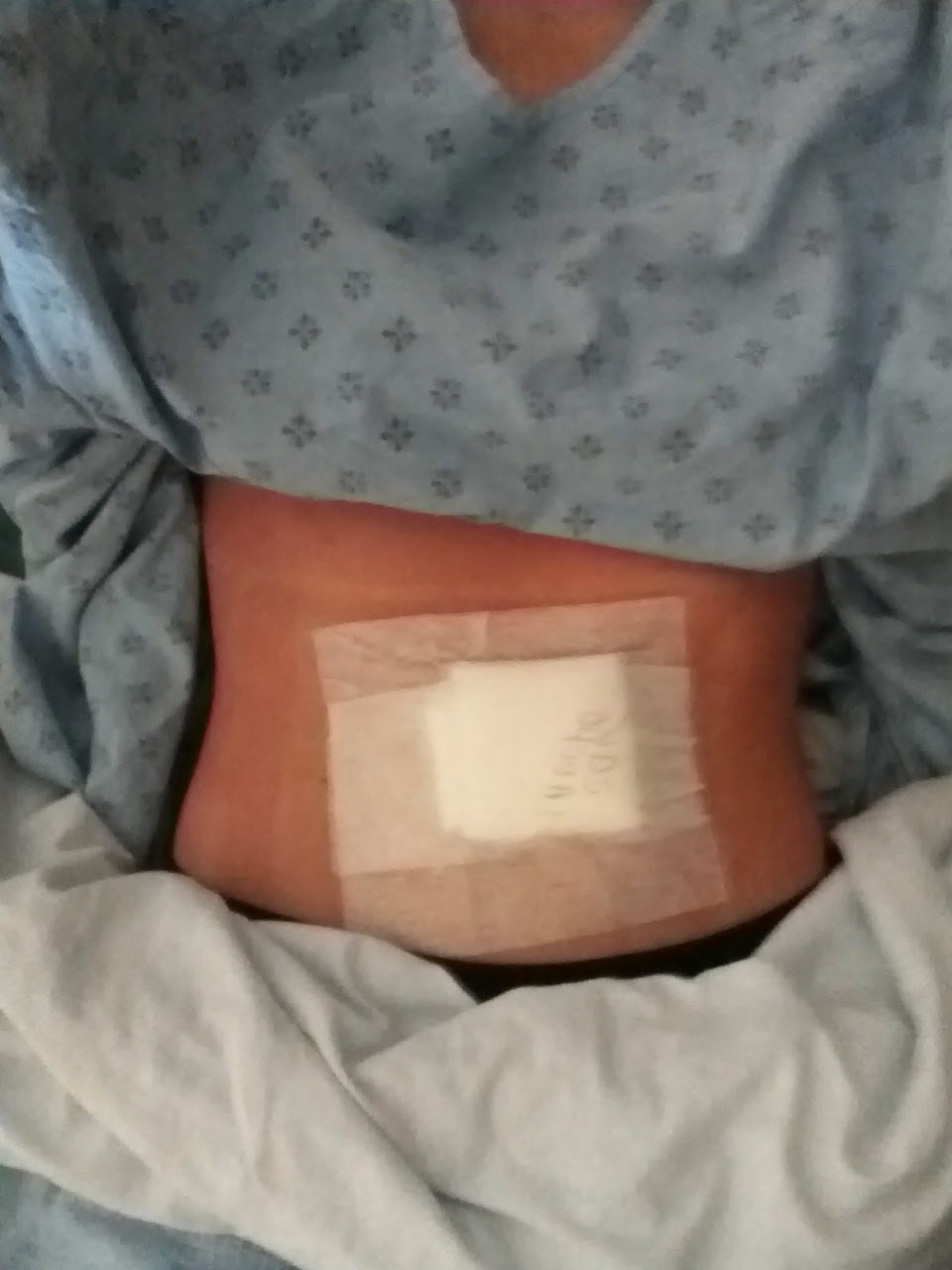 Wow where has time gone! It's been months since my last blog. In fact, I never ended up blogging about my last race. I started it, but never finished it. I will recap very briefly.

At the end of May I headed over to Ottawa for the Lowertown Brewery Ottawa 10km as part of the Ottawa Race Weekend. This was my second year at this race and I had the goal of trying to hold off the guys for longer than 5.5km this year. We had a 4:10 head start over the men and when they caught me at almost the same place as the year before (and even threw a few elbows as they swarmed me) I knew I was not having the greatest race.

Basically, my legs were not there. My legs would not turn over and my stride felt off. I ended up finishing 5th Canadian behind Lanni Marchant, Rachel Hannah, Lindsay Carson and Kate Bazeley in a disappointing time of 35:38, which was actually SLOWER than last year. The weather was slightly different though, last year being cool and this year being very humid. I was initially super bummed about the race; however, I have determined that a few factors likely lead into the results of this race, which I will get into those details in a future post. Nevertheless, it was a fun weekend. Results can be found here.

Now onto the BIGGER and more important news! On the way home I ended up in the very last row. Initially I was bummed about it. Having sat at the back before, it tends to smell like the washroom and you always get the washroom lines. When I headed towards the back, I noticed that the man beside me appeared to be a runner so that lifted my spirits a bit. What I didn't expect, is to spend practically the entire flight home chatting to this man.

It turns out this guys name was Oliver and he worked for Sundog Eyewear. If you know me, you know that I am wearing sunglasses 95% of the time. The only time I do not wear sunglasses is when it's raining or dark. Even on cloudy days I am generally still in sunglasses. I had previously been wearing Ryder glasses that I had won as my age group prize at last years St. Patrick's Day 5km. While they weren't ideal for my face, they were free so why not.

By the end of the flight, Oliver had pretty much offered a sponsorship with Sundog (who also sponsor Ultra Runner Ellie Greenwood). A few days later I heard from Gary and I was set up to receive some new sunglasses. In fact, I received 5 pairs of glasses, 4 pairs for running and 1 pair for everyday wear. Let me tell you, I LOVED all of the sunglasses. Sure I had my favourites as each pair fit slightly different, but overall I think I would wear all of them at some point.

Here is how I would rank them if I actually had to: 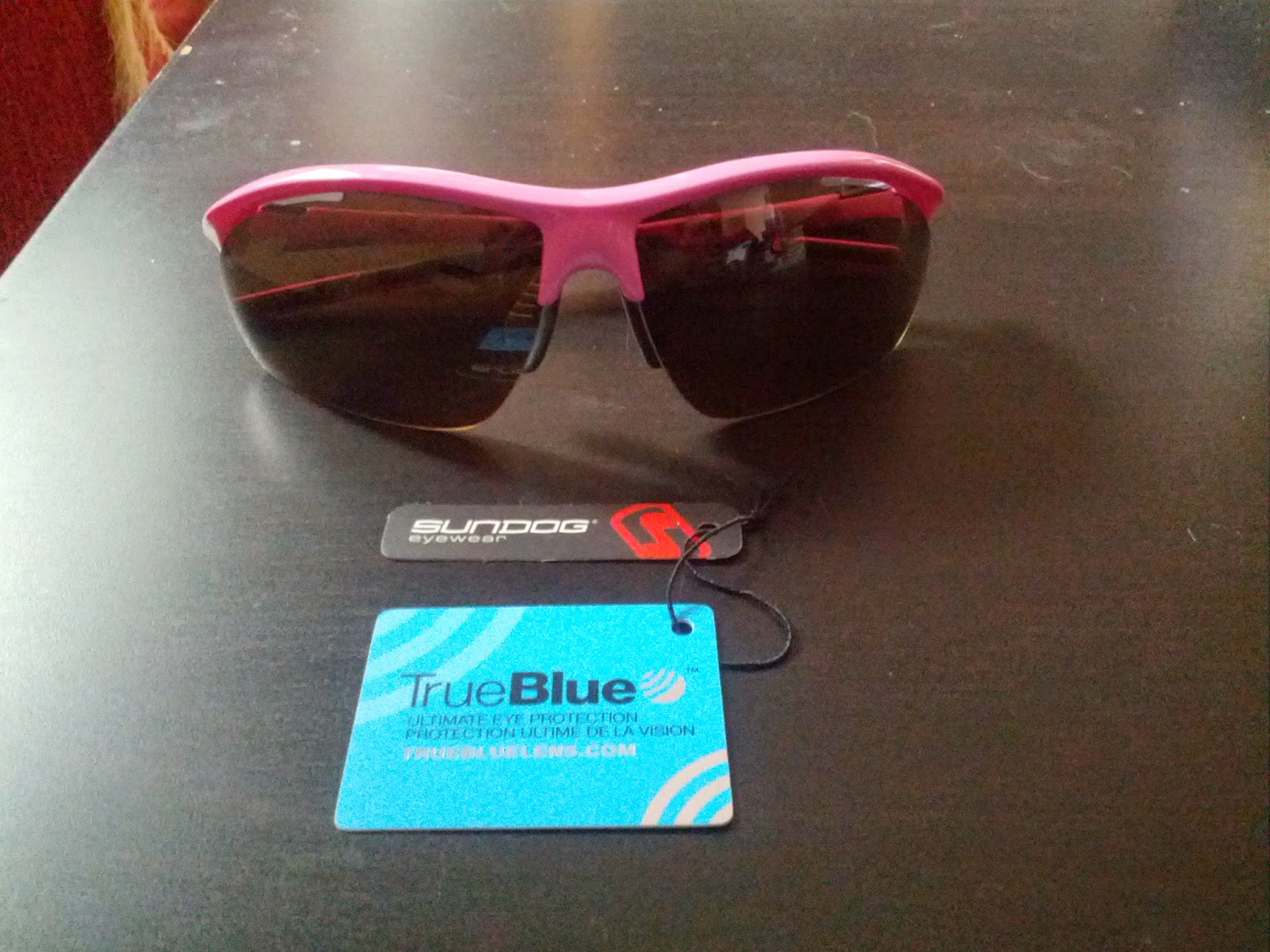 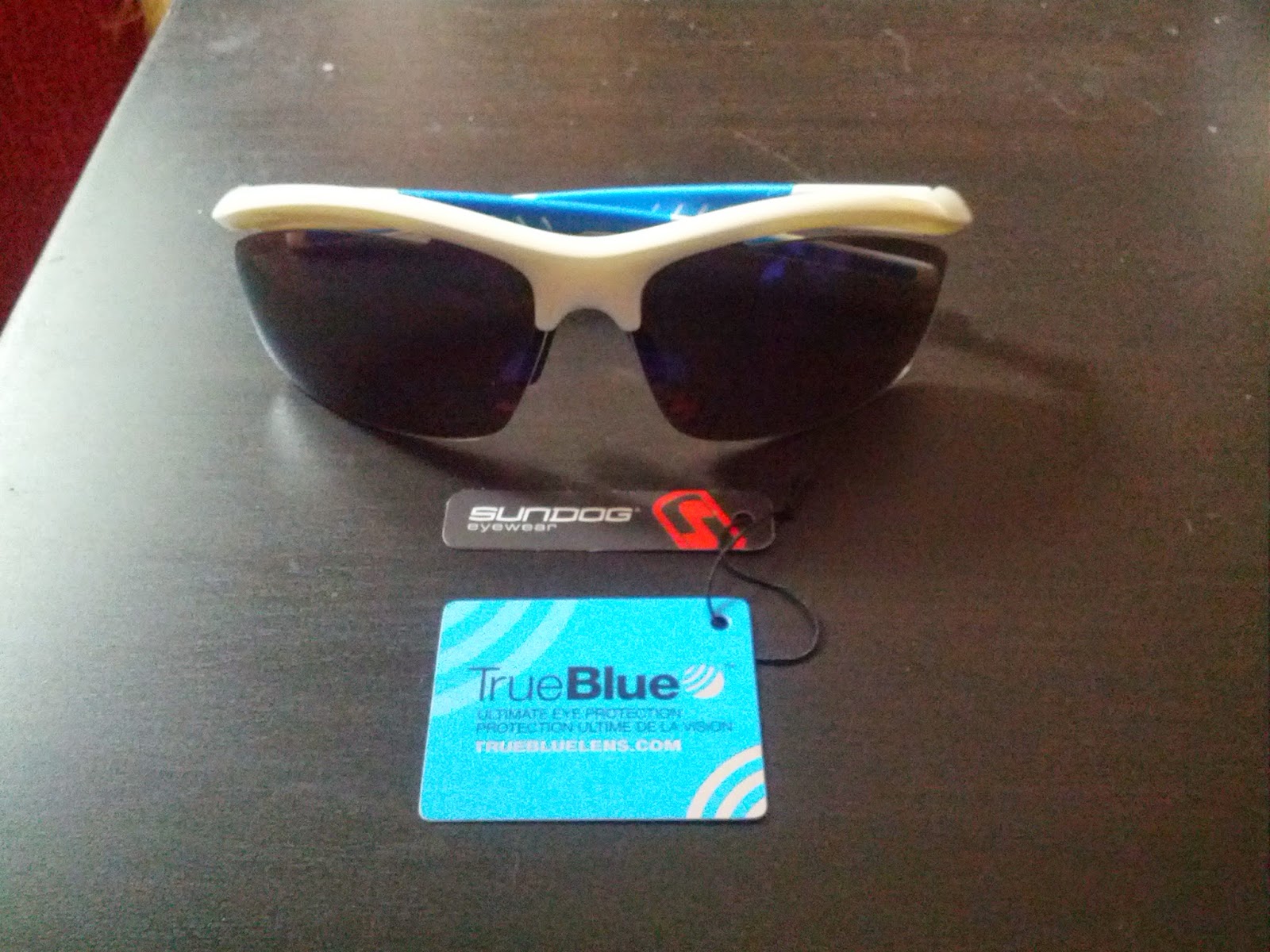 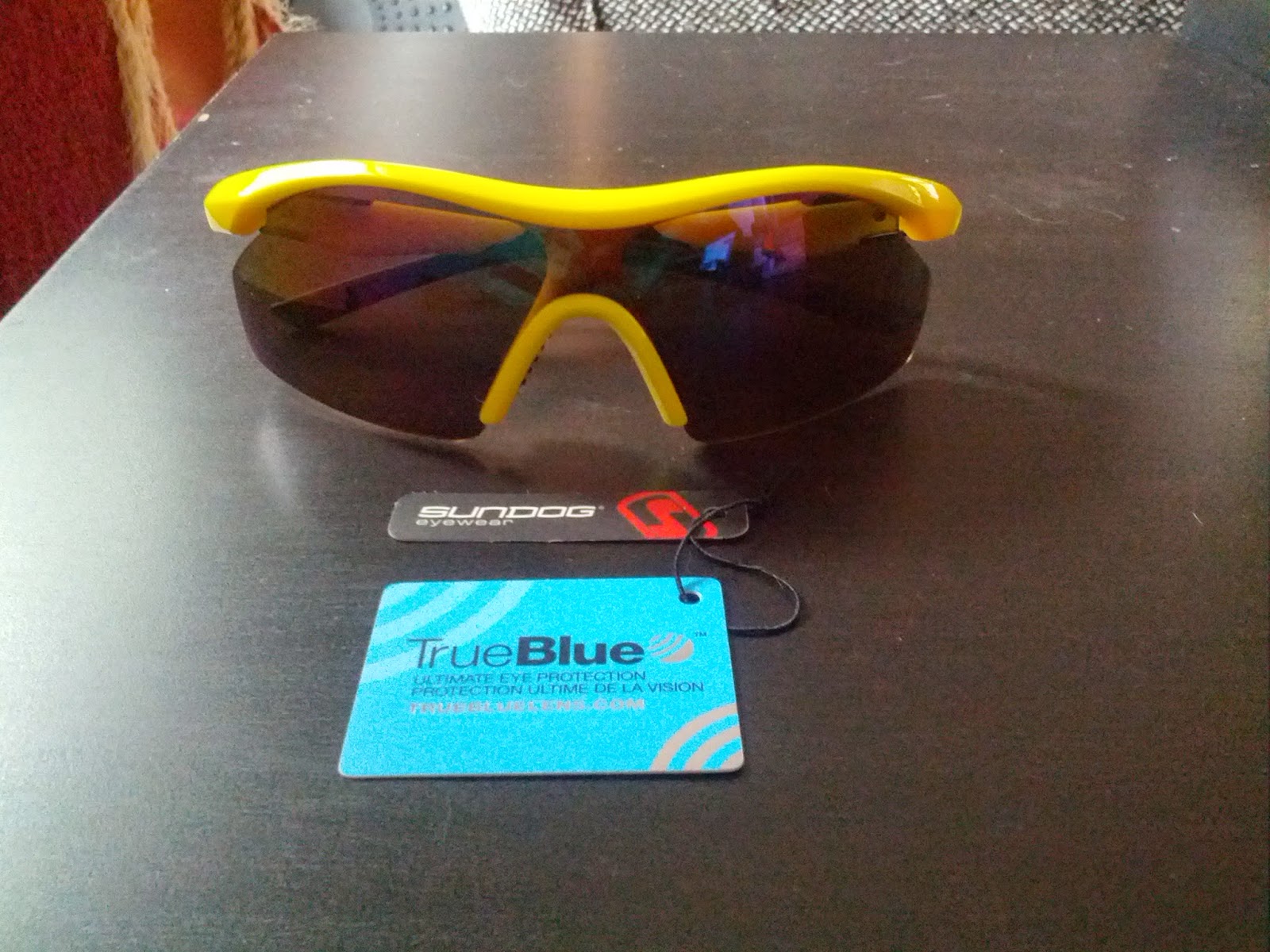 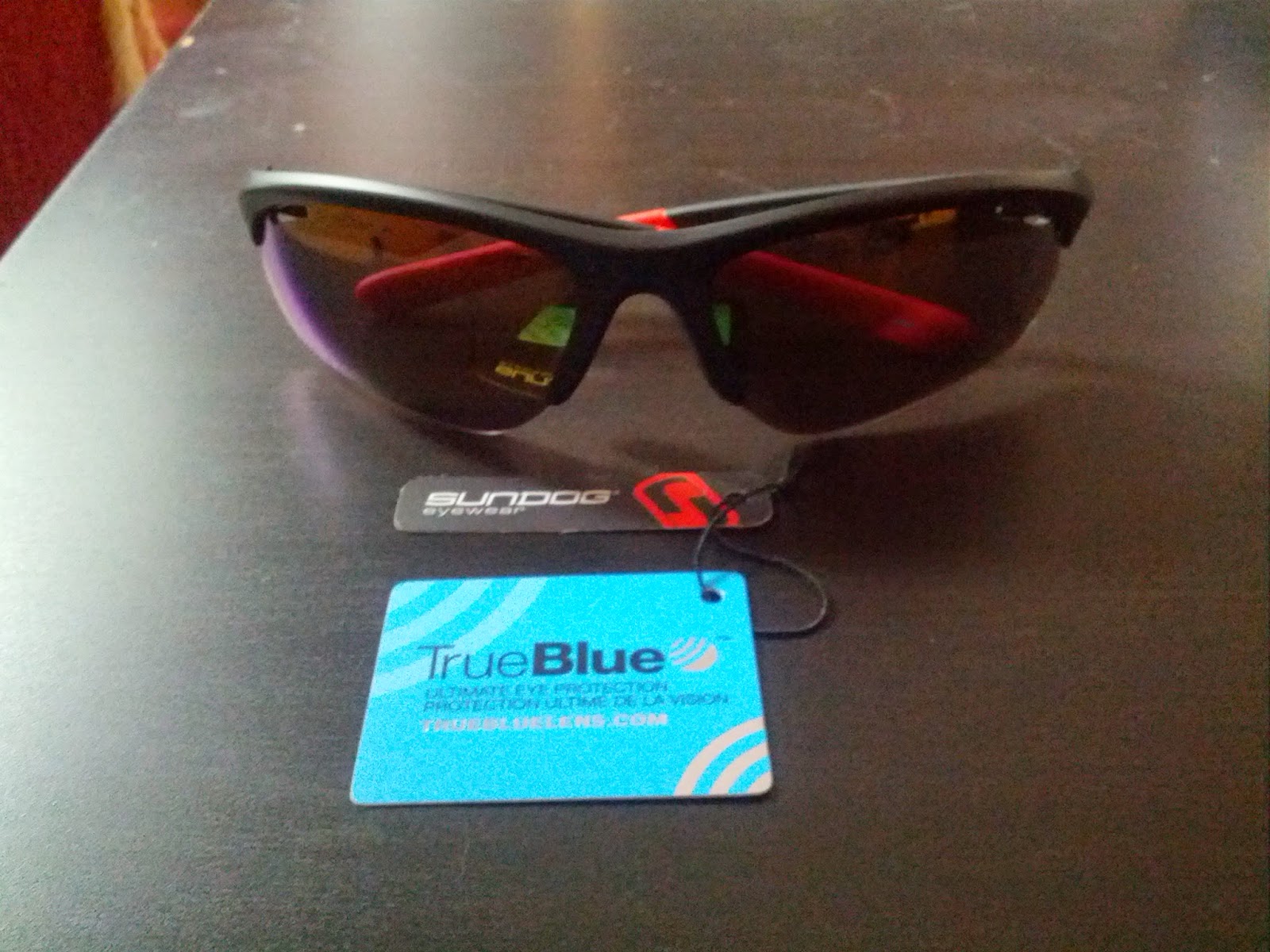 All of these glasses have the TruBlue lens, which by their website states:

"The human body naturally produces melanin and ocular lens pigment; together these substances are nature’s way of defending the eye from invisible and visible light.
The TrueBlue™ lens is the only non-prescription sunglass lens in the world to incorporate both melanin and ocular lens pigment, to provide ultimate eye protection and vision performance."

So basically by partnering up with Sundog Eyewear I get the most optimal protection for my eyes. What else could I ask for? I don't know about you, but my eyesight is pretty important to me so thank you Oliver, Gary and Sundog for this opportunity. I cannot wait to represent your company and show off my wonderful new sunglasses in my future races! 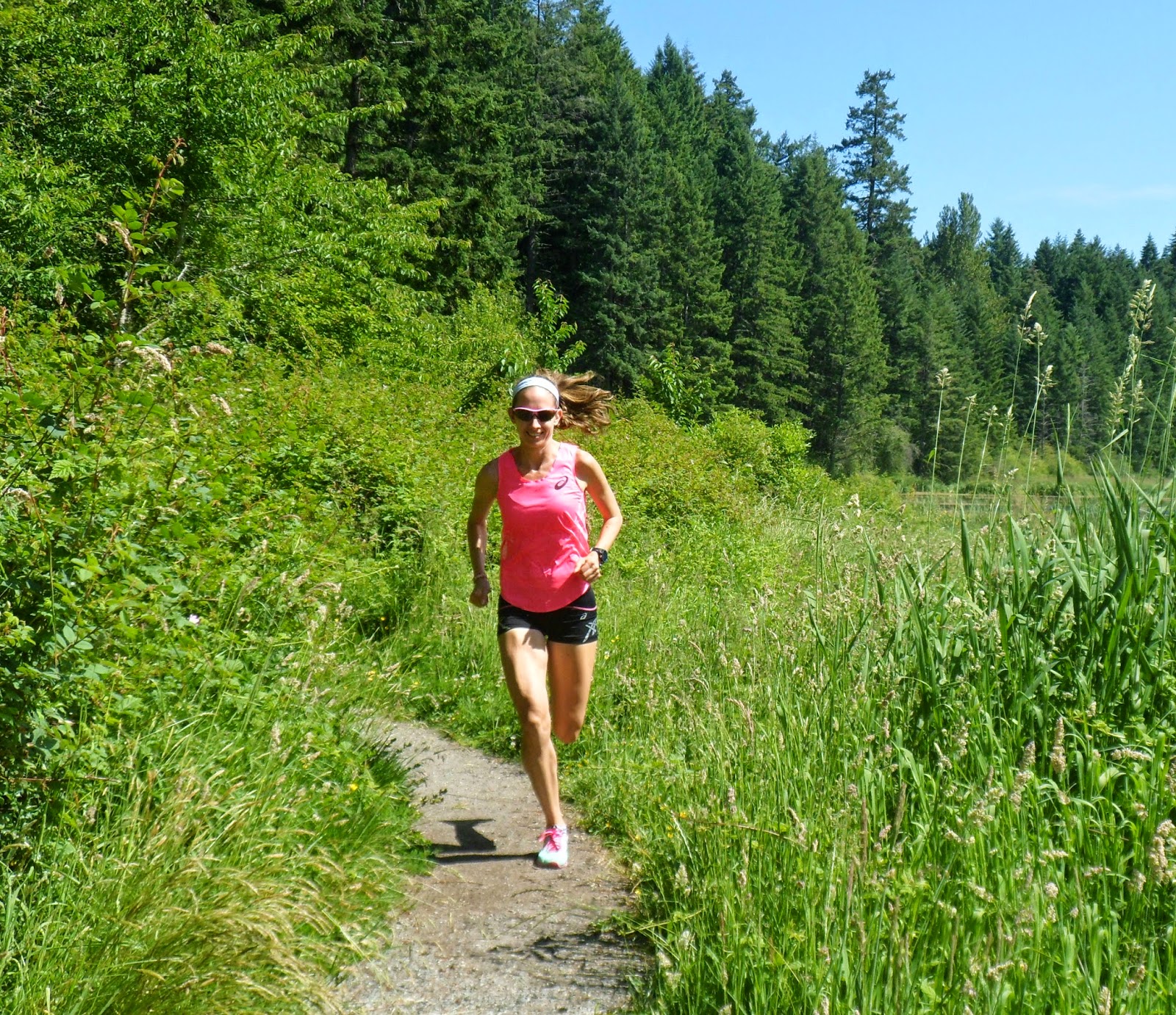