What's that? Yet another half? You betcha. This past weekend (24th) I opted to hop into the Scotia half marathon in Vancouver. I was offered a free entry, so I thought why not. This was going to be another "let's train through the race" type of event. With workouts on the previous Tuesday and Thursday, surprisingly my legs felt pretty good going into Sunday.

I headed over to Vancouver on Saturday afternoon, in order to pick up my race number the night before. Since the expo (smallest one I have ever seen I think) was closing at 5pm, that meant taking the 12:50 ferry as the next ferry after 3pm wouldn't make it in time. Damian happened to be on the same ferry so it was a nice change not to be alone.

Once I had my package, we attempted to find the bus I was supposed to take. Instead we found the Jazz Festival going on downtown, closing off the street where my bus stop was going to be. Trying to find out info on my phone to locate where the bus was rerouted, walking through the crowds, starting to get extremely hot due to too many layers.... this girl was starting to get a tad cranky (sorry D). Eventually we found the right bus JUST as it was arriving.

From there I headed out to my friend Catherine's place, who lived a few km from the start. My sister was out of town anyways, so thankfully Catherine put me up for the night. I got to see her gorgeous house and meet her wonderful family. Her daughters were the cutest.... until it came to bedtime. Then again aren't all kids like that?

Catherine made a great dinner of Pad Thai with tofu for us. It was yummy. We chatted all evening while checking up on Ellie G's progress in the WS100 miler. She finished SMASHING the course record by 50 minutes around 10pm, so then I headed to bed.

I spent the night with my usual routine of waking up numerous times. I never sleep through a night, always waking at least 1-2 times; however, on race nights, I am up 5+ times at a minimum. 5am my alarm went off and I had a small breakfast of a cliff bar and powerbar. Just after 6am, I headed out the door and up the road to meet John who was giving me a lift to the start.


View when heading to meet John on race morning 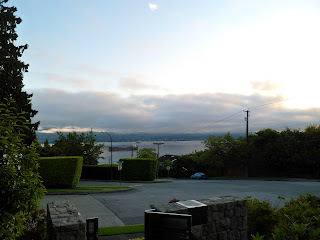 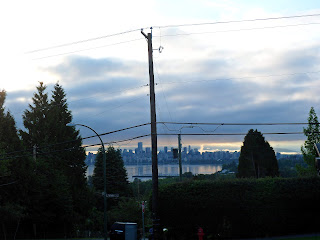 He dropped me off to find parking and I wandered around trying to find out if there was a place for elites to leave their stuff. Eventually I met up with Kristin Smart and Helen Ritchie and we all found the elite van near the start. The 3 of us then did our warm up together.

My legs were feeling pretty great considering still had a decent mileage week though not nearly the 190km "taper" week that Reid Coolsaet had. Before I knew it, the race was under way.

I went off quick and then relaxed into a pace. I honestly felt quite good. At 4km I saw that race favorite Lanni Marchant was on the side of the road limping. There was a turn around shortly after that and I counted I was now 5th female. That is where I stayed unfortunately. I had some big cheers from Kirsty and Jenn around then, which was greatly appreciated. 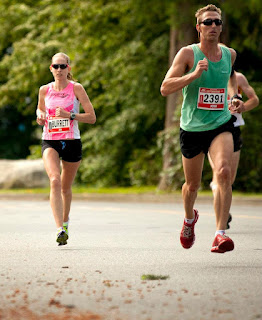 I don't remember details of the race; however, I noticed on the downhill section I lost ground to the guys in front of me (damn me for not being a downhill runner). I caught them again along the bottom. At around 11km or so I think I pulled out my gel and attempted to consume it slowly, but it was a no go. A water stop shortly after resulting in me actually having to spit the water out as I could not swallow it.

Then my stomach turned on me. By 13km my pace started to show my stomach issues. I felt queasy. I have felt like that in a race before, but never until the end. I hoped it would pass and continued to try and get in my gel. No luck, it turned my stomach every time. I often had to slow my pace drastically as I tried not to throw up. I even dry heaved a few times. Needless to say it was not a fun feeling. 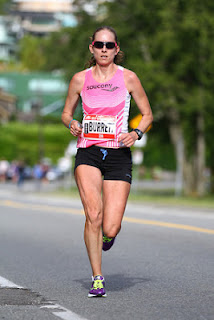 Just before I started to feel queasy, I was actually catching the 4th place woman Lisa Brooking. I was reeling her in with every km and it appeared as though I would catch her, but my stomach had other plans. I would pick up the pace until I felt sick and then slow it down. I think I finally tossed my gel, which had now leaked all over my hand around 17km. I saw that someone had a garbage can on the side of the road so I threw it beside it. At that point I was not getting my gel in, so I gave up holding it. My hand was now a sticky mess. 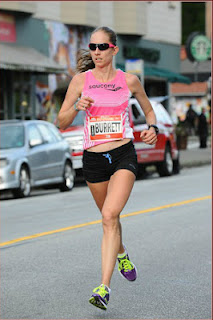 Coming up the Burrard Bridge I felt the strongest and felt I could pick it up and reel in some time, but the downhill tumbled my stomach around more and a few more dry heaves along the flat left me almost in tears. I was so close to the finish, I just had to get there. 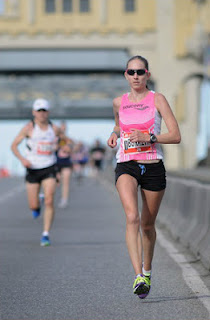 Finally I rounded a corner and there it was. I saw the clock and was disappointed but not surprised. Officially I finished 5th woman (1 spot out of the money yet AGAIN) in 1:22:33. I was 1 minute and 40 seconds off of my best time. 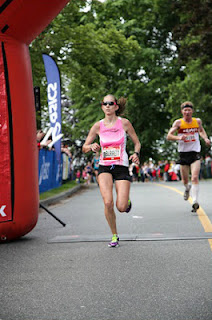 Now that I think about it, that isn't bad considering the last 8-9km. Considering I was heaving and practically jogging at times. I went through 10km in 37:36 and was feeling good. In Montreal I went through 10km in 37:56 and it felt way worse. It wasn't my legs that went on me, it was my stomach. I do believe I would have had a great time and new PB if my stomach didn't hate me.

Is it an excuse? Some may see it that way. I don't feel it is, because I speak the truth. It was an awful feeling and I hope to never run into that trouble again. 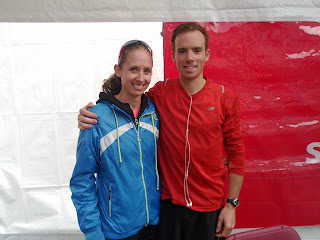 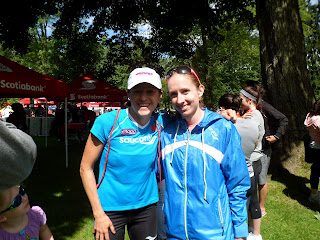 Full results found here
Posted by Erin at 9:44 AM 3 comments: