In the last few weeks I have been in discussion with my coach Matt as to what races to attack in the upcoming weeks.  Whether it would be 5km then a half or 5km and then a 5km. I was leaning towards the double 5km; however, that small part of me that is in love with half marathons, wanted another attempt at that distance after a less than satisfying First Half last month. With a half scheduled for the end of April (Montreal) I thought a half in February, March and April might be a bit much. In the end I decided on the double 5km.

After Bazan went so well, I was eager to try my hand at a 2nd race; however, I was well aware that while the St.Patricks course was altered this year to be faster, it still wouldn’t be quite as fast as Bazan. Not to mention the races were 6 days a part. In fact, I did a mini workout on the Wednesday between just to spin the legs and I felt like I was sucking wind and dying. My legs weren’t sore from the race, but they simply would not run fast. As days passed though, things felt better.

Initially I was hoping to catch the float plane from Nanaimo to Vancouver, but with “sales” less than ideal, I opted for the cheaper (but still not cheap) more time consuming travel of the ferries. That meant after a night of minimal sleep, I was up at 5:30am and on the 6:30am boat to Vancouver. Thankfully I caught about an hour sleep in the backseat of my truck! I even packed a pillow and blankets to keep me company. Anyone who knows me will be well aware that when I travel via ferry with my vehicle, I do not tend to leave my vehicle and opt to sleep instead. Ask my sister, she is the same. Blame it on riding the ferry hundreds of times as kids.

I arrived to the mainland and found it was raining, surprise! I arrived to the race site at 8:45am and picked up my race number and hit the washrooms. I had a quick look around for Catherine Watkins but in the end I could not locate her so I headed out on the warm up alone. I checked out the first 2km of the course and then cut through the middle to check out the final few km. I followed my same warm up from Bazan earlier in the week. I found my legs feeling pretty decent. Some drills and strides at the start line and I finally found Catherine along with Ellie Greenwood.

The race started fast of course, doesn’t almost every race, not to mention 5km’s? It was basically a downhill for the first km. Unfortunately, I am not much of a downhill runner, so I didn’t find too much of an advantage of this. Right after the km marker, there was a sharp turn to the right to head down onto the seawall where we were met with a bit of a headwind (yay). I found myself right with Catherine and Ellie while Sabrina Wilkie was slightly ahead. We hit the mile marker at 5:20 with Catherine a second ahead of me. Unfortunately, Ellie’s shoe came untied and she had to stop so she had dropped back slightly by this point.

Just after 2.5km we hopped up off the seawall onto the sidewalk, then a somewhat sharp corner across the road onto a gravel trail briefly then across the road and back onto the seawall around 3km. Catherine was still slightly ahead of me with 2 other guys between us. We stayed on the seawall until just over 4km in which I know Catherine and I both tried to pick it up and I even thought to myself “thank god Catherine is here” as I pushed along. We then made another really sharp turn off the seawall and then began our uphill climb to the finish.

While the climb was certainly not as long as last year, it still wasn’t easy. Catherine and I both slowed on this final climb and probably were both cursing the hill. As we began the final portion, Catherine had a supporter who told her that I was right on her “right shoulder.” We crested the hill and I could see the finish so once again I gave it my final sprint and managed to make it past Catherine to finish 2nd in 17:16 (17:14 chip) with Catherine also 17:16 (17:15 chip). Sabrina wasn’t far ahead taking the win in 17:07 (17:05 chip). 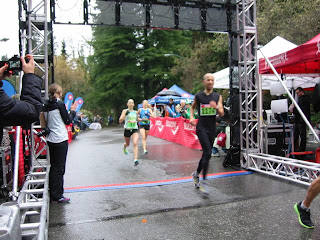 I am proud that I was only 11 seconds off my time from 6 days earlier at Bazan Bay, especially since it was a slightly slower course. I am pretty sure I lost a good chunk of that in that final hill so without that hill, Catherine and I figure our times would have been similar or possibly slightly faster than Bazan. Another good sign.

We got changed and headed out on a nice 30 minute cool down before getting back to the awards just in time. The one bad thing about this race is the struggle it takes to get inside the pavilion where the awards are held. I ran into this problem last year and then again today. The security at each door wants everyone to enter through the big long line out back. Eventually with some arguing and convincing that we need to be inside for the awards we get in, but it still a pain sometimes.

In the end I claimed 2nd female and 1st in my age group (30-34). I finally broke the curse of finishing 1 spot out of the money and 1 spot out of the championship medals! Woo hoo! Catherine, Ellie and I collected our awards and then while everyone else stayed for the spectacular after part, we bolted and I rushed off to the 12:30pm ferry. 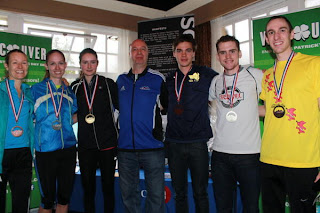 Ellie and myself collecting our 30-34 AG awards 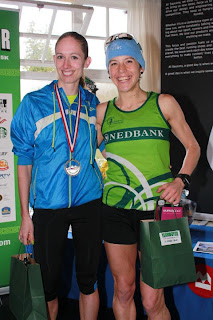 Thanks to Karen and Steve at St.Patrick’s 5km. You guys run an incredible race and we are always well taken care of, not to mention one of their awesome sponsors happens to be Saucony Canada themselves!

Friends with my Nemesis (aka Bazan Bay 2013)


Last weekend (March 10th) I found myself heading to Victoria to join 748 other runners at the 2013 Bazan Bay 5km. The night before the race, ChrisKelsall (Athletics Illustrated) sent me the following message via facebook predicting my finish time. You can also see my response below.

I worked until 10:15pm the night before, came home and got everything ready for the next day. With daylight savings “Spring ahead” happening that night, I was less than enthusiastic about losing that hour of sleep! I woke up before my alarm and was out the door by 8:15am.

I arrived in Sidney at about 9:45am and proceeded to pick up my number, catch up with some friends and then headed out for my warm up shortly after 10am. I usually do a 20 minute warm up, but I decided to try something new this time, extending the warm up slightly and adding in some speed. I know it is highly preached “NOT” to try something new on race day; however, I felt like I had nothing to lose. 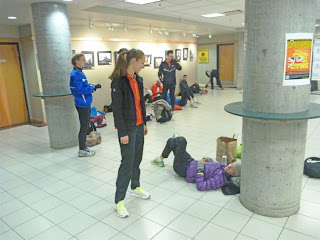 Over the years I have never exactly enjoyed the race distance. To me 5km seems like a sprint. I would find I would get warmed up right near the end of the race, so during a recent massage with Yvonne, she suggested maybe altering my warm up.

On the start line, packed in like sardines, the countdown began and we were off. This race (like most) always starts out fast. I went out fast, yet comfortable. Around 1km I found myself running beside fellow Nanaimo runner Damian Allen who had a well-known goal to “take me down” in this race. Up ahead I knew there was Sabrina Wilkie, Jen Millar, fellow Saucony Canada athlete Alison Hooper and I also saw another triathlete who turned out to be Alex Coates. I did not realize that there was another triathlete Ellen Pennockup further in the lead.

After the first km, I settled the pace down a bit as I saw 3:22 and based on my goal of 17:30 (3:30/km pace) I didn’t want to screw myself by continuing too fast. Just after 2km (I think) I overtook Alison with a 3:30. At 2.5km we hit the turn around and I found myself boxed in and caught on the inside. This resulted in a tight turn for me, not to mention the guy in front took the turn around too slow for my liking and I believe I may have put my hands on his back to avoid running into him. I literally nearly stopped around the corner and had to get going again.

Can you tell where the turn around happened?

On the way back, we hit 3km (3:28) and I knew it was time to give it what I had. I still felt too comfortable at that stage so I picked up the pace and kept my eye on Jen’s back as I saw I was gaining ground on her. Not to mention she was in my age group!

The 4th km passed in 3:23 and I was still gaining so I picked it up again. The 100m sprint marker meant I began my sprint and I honestly thought I was going to run out of time, I glanced at the clocked and saw around 17:10 and thought “holy crap” and then I realized Jen was just cruising to the finish. I upped it again and passed her right before the line with a final 3:18. I wasn’t sure my exact time but I figured around 17:15. Someone asked me my time at the finish and I looked at my watch, which as usual I had stopped a few seconds after the finish line, and saw 17:06. WTF? It was then discovered that the clock was actually fast. Official results had me at 17:03 chip for a 54 second personal best. HOLY CRAP!

Instantly I was even happier, though I won’t lie, that small competitive side of me thought “crap, if I had known I was only 4 seconds from 16:xx……” and “darn, I lost that time at the turn around.” Nevertheless I will take that 54 second PB and over a week later I am still somewhat in disbelief that 16:xx is right there. Not to mention the good sign was that my legs had little to no soreness other than a medium blister on the side of my foot. 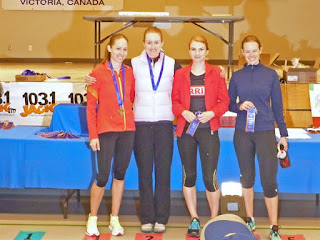 So in the end I was 4th female overall, 1st in my 30-34 age group, in 17:03 with a whopping 54 second personal best! Now I ask myself, why did I ever hate 5kms?! All week long when people asked me about my race, I tried to stay positive and after generally saying “I hate 5kms” I would follow that with “I will try to make friends with the 5km this weekend.” I did exactly that. I made friends with my nemesis (the 5km distance). 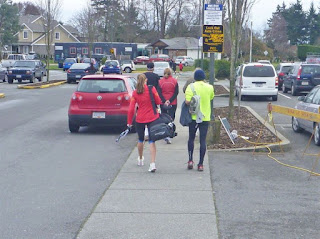