After the excited of the Nanaimo Sport’s Achievement Awards, I found myself home around 11pm rushing to get everything I needed ready for Vancouver First Half the next day. I was in bed and asleep around midnight, waking up a few times as usual on race nights, then the alarm went off bright and early at 4:45am. Thankfully I don’t live very far from the airport so I honestly slept in as long as possible.

I arrived to find the airport fairly busy for a 6am flight on a Sunday morning. I had already checked in online so I simply headed straight for security. Everyone was on time so we actually got moving at 5:57am. A short plane ride (15-20) minutes and we landed at YVR. I got off the plane to a cold wind and hoped that it would die down over the next 2 hours.

I found the entrance to the Canada line and had a few minutes to spare before the train arrived. I think the sky train downtown was actually longer than the plane ride! Nevertheless, I arrived at the Yaletown station which was only about 100m from the Roundhouse Community Center with time to spare. In all, I went from Nanaimo to the race site in just under 1 hour. Now THAT beats taking the ferry any day! If only flights were cheaper!

Roundhouse was pretty empty when I arrived, so it was no problem picking up my number, checking my larger bag into bag check and hitting the washrooms. I then had a seat and waited for others to arrive. While waiting I noticed that my back had locked up, right behind my left shoulder blade. I tried everything but could not get it to release. I was definitely wishing Abe was nearby for a quick treatment.

Soon after it was time to warm up, so I headed out with Catherine Watkins and Craig Odermatt for an easy 15 minutes and then hit the line-up for the washrooms before it became too late. Unfortunately at that point I was a bit rushed and didn’t really get to finish my full warm up, opting to instead strip off and get in a few strides. It was nice to see Natasha Wodak-Fraser’s smiling face on the sidelines and I know she was just dying to hop on the start line. She would have demolished the entire woman’s field and quite possibly most of the men as well; however, after racing an awesome 9:02 indoor 3000m the night before and in the middle of prepping for World XC, it probably wouldn’t have been the smartest move.

Someone, somewhere sung O Canada and then we were off. Catherine Watkins, Anne-Marie Madden and myself soon found a groove together where we spent the next 10km basically. At that point, we could see Ultra star Ellie Greenwood coming back to us. I went through 10km in 37:38. Around this point, Catherine and Ellie started to pull away from me slowly and I found myself a few seconds back as I went through half way at about 39:40 with Anne-Marie a few seconds behind me.

Just after half way I attempted to take my first gel of the race; however, this was not going over so well. My stomach had already turned by this point so I think over the next 7km I got in about 2 small mouthfuls before I finally tossed it beside a km marker. Without the gel I started to bonk. I went down a small hill probably around 18-19km and my right quad nearly gave out. I hung on the best as I could, but I definitely slowed a lot during the last 5km fighting a battle between my bonking legs and my upset stomach. 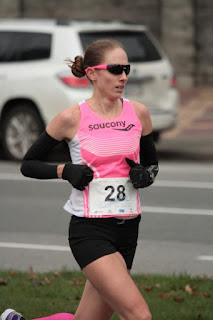 The final hills before the finish were not easy and once I hit the top and the downhill towards the finish I gave it all I could give. Just before I rounded the final corner I could see the clock at 1:19:55 and I believe I muttered a few choice words before I crossed in 1:20:17 (1:20:16 chip) as 5th female. As soon as I was across the line, I could feel my back tighten up and my legs began to wobble. 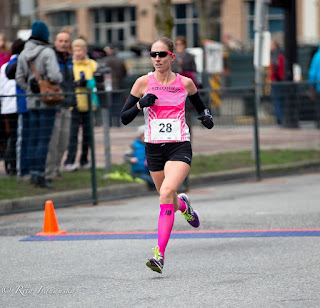 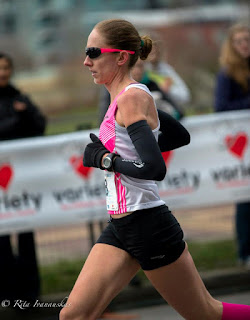 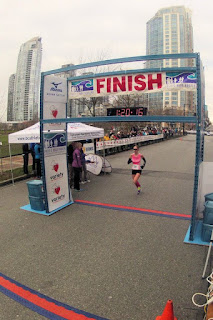 The end result wasn’t what I was hoping for as I know I am in much better shape; however, I do realize that considering how I felt in the 2 weeks leading up to the race which nearly made me pull out of the race before it started, it actually ended up being quite decent. I was only 19 seconds off my best time and my coach actually was surprised because he didn’t even think I would finish.

Rita captured my thoughts "that sucked" 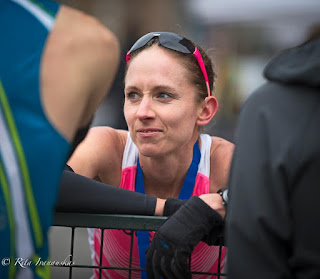 Now here I am, a week later writing this blog. Am I happy or disappointed with my race? I have had time to reflect and I still have mixed feelings. Overall I am satisfied with my overall time and place; however, what I am dissatisfied with is how I handled myself over the latter part of the race, specifically the final 5km. I had a PB within my reach and I let my stomach win which led to the bonking of my legs. At the same time, I know I am in better shape and I know there is that PB in me so I will just have to try again.

Results are found here.
Posted by Erin at 9:56 PM 1 comment: 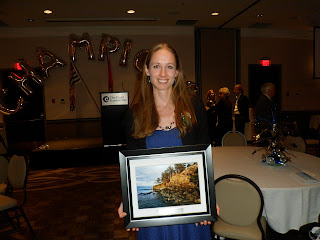 A few weeks ago I received word that I was nominated for Nanaimo’s Individual Female Athlete of the Year for 2012. Within a few days of hearing this news, I received word that I was selected as one of three finalists for the category and was requested to attend the Nanaimo Sport Achievement Awards Banquet on Saturday February 9th. I was very honored to be selected as a finalist and my initial thought was that I had zero chance of winning so I actually told the organizers that I would be unable to attend due to running the Pacific Road Runners First Half Half Marathon the following morning.

The more I thought about it, I realized that I was incredibly lucky to be chosen as a finalist and that I really wanted to attend. I researched my options and was told that my award was one of the last to be awarded and that I would not make the last 9pm ferry to Vancouver. I checked out the float planes and saw that they didn’t fly out of Nanaimo until after 7:30 as they don’t fly until the sun comes up. The last resort was Air Canada and flying from Nanaimo’s airport to YVR and then catching the Canada Line downtown.

The schedule was tight, leaving little to no room for error. In the end, I booked the flight and crossed my fingers that there would be no fog or delays. So this past Saturday, I got all dressed up and attended my first Nanaimo Sport Achievement Awards.

The event was being held at the Coast Bastion Hotel and we had to be there by 6pm. We checked in and found our table and then went up to a “holding room” per say where we had food and drinks with other nominees. I kept two junior athletes company as I knew one of them (Madison) through the track club. This little speedster broke my school records I think almost 3 years ago now. I believe I had held the record for approx 16 years but I can’t remember exactly.
Closer to 7pm we were taken towards the main ballroom and were piped around the outside of the room by a guy playing the bagpipes. We found our seats and then had a delicious prime rib dinner, starting with salad and ending with Cheesecake. The awards were mixed in throughout the night.

As it came closer to my award category, I won’t lie, I got nervous. I was up against racewalker Katelynn Ramage and a talented 13 year old Sage Thomas.  I have known Katelynn for more than a few years both through NDSS (who I helped coach) and the local track club. She is really skilled at her event and a top ranked athlete in the country. Sage on the other hand had many medals at various national/international events. Unfortunately neither Katelynn nor Sage could attend the event and were represented by their parents. Needless to say, I didn’t once think that I had this award in the bag.

Not to mention we had 2 other nominees at my table and they had both won already. I was either going to continue the trend or break it! When they called my name I was shocked. I went up and accepted and then had my photo taken by the talented Lance Sulllivan. Thankfully I didn’t have to make a speech as I am not a fan of public speaking. If I was required, I would have thanked my coach Matt, my boyfriend, family and friends, not to mention my sponsor since 2011 (Saucony) and of course my health professionals Abe, Joe and Yvonne.

I even ended up getting a quick interview with the local Newspaper plus a quick interview with CTV VI News (awkward!!! I am not a natural). The constant question I was asked was “what is next for you” to which I replied, well I have a half marathon tomorrow morning at 8:30am in Vancouver (at this time it was probably at least 10:30pm). 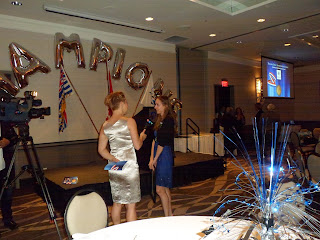 I still have no idea who actually nominated me; however, if you are out there, a huge thank you! When I returned to work on Wednesday (I work at a seniors facility) I found that my co-worker had made a “wall of congrats” which included all my news articles, plus each resident signed their name and wrote special messages. It was quite the surprise! Thanks Colleen! 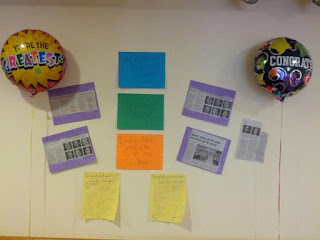 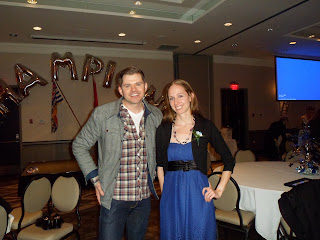 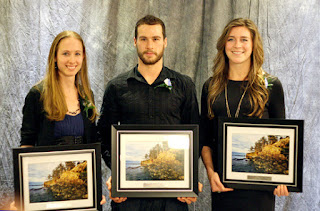 Here are some news articles from the last few weeks. 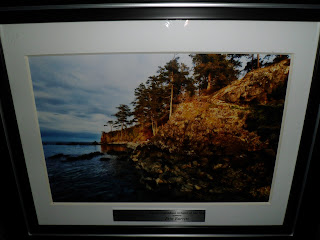 While the actual time spent on my feet training is an important factor in my improvements and success thus far, another important factor is having an incredible support team. This includes my coach, family, friends, coworkers, RMT and of course my incredible chiropractors.

As I have mentioned in previous posts, I regularly visit two of Nanaimo's best, Dr. Abe Avender and Dr. Joe Foglia both of Island Optimal Health and Performance (different locations). In fact, quite often when I book an appointment with one of them, I feel as though I am "cheating" on the other one! Is that odd?

Anyways, the reason for this post is that I would like to congratulate both of them on the arrivals of their sons. On the right is Abe with his son Watson born on January 18th while on the left is Joe with his son Hudson born on February 9th. I think this is an adorable photo of all of them; however, the Canuck fan in me sees something terribly wrong with the awful choice in jerseys ;)
Proud Dads! 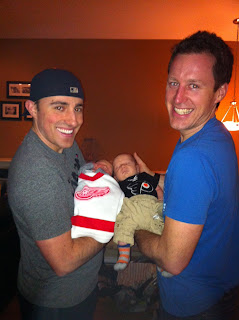 Anyone in Nanaimo, should you need a chiropractor, I highly recommend both Abe and Joe. Abe works out of the north office on Rutherford Road and Joe works out of the south office on Bowen Road. They both have worked wonders on me over the last few years, not to mention they are highly motivational and always give me a good laugh. Congrats you two and to also Watson and Hudson's mom's! PS. Go Canucks Go!
Posted by Erin at 4:49 PM No comments: