Well hello from Montreal! I would love to say I have seen Montreal but honestly I haven't. We have been placed in a hotel only a km from the airport and I have been told it's at least a 30 min drive into the city. Time has not really allowed that today with having to be at a meeting at 4pm. Not seeing much had been a disappointment.

The weather is also disappointing. we flew into winds. The wind hasn't gone anywhere since arriving nearly 24 hours ago. 2 runs completed and both had gusts of at least 40km/hour. Side winds that blow you off course and headwind that stops you in your tracks nearly. Tomorrow is calling for similar. It's also somewhat cold. -1 this morning that felt like -7. Definite fun!

it has been fun though. Great roommate Meghan whom I am meeting for the first time. Then multiple other people are here too some of which I have never met before.

Anyways fingers crossed with the wind. Goals have changed slightly. 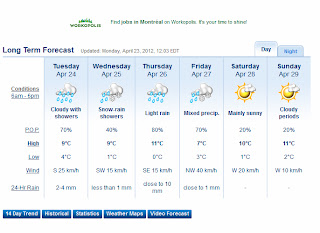 I have been on Montréal weather watch. This is the prediction for this week (screen shot taken this morning). Nasty storm moving in currently and I hope this weather holds. Sunday looks perfect with mild temps and mild wind. Keep your fingers crossed for me!

That is what I wanted to scream out after completing my first Vancouver Sun Run 10km this past weekend. I finally ran a 10km that I am proud of.

Weeks ago I was told I would be considered elite for the 2012 race, which shocked me as my official PR was 38:20 and well slower than the required standards. Mind you I had not raced a 10km since September 2010 which was well before my injury in January 2011. Actually my official 10km PR was from April 2010. Nevertheless, it has always been a race I wanted to try for the past few years. I had intended to race it last year, but as the Sun Run began I was at the start of my 4 weeks completely off after having failed to improve with 2.5 months of cross training.

With the sickness that occurred just under a month before the race, I wasn't sure if I would actually race. Finally I felt as though I beat the cold just over a week before the race. While I still didn't feel like my actual self (aka everything felt harder than normal), I thought I would attempt the race and see what happens.

People actually laughed at me when I stated my goal was to beat my old time of 38:20. Okay, so I gave myself an easy goal. Being sick, I didn't want to put too much pressure on myself with too high of expectations. Ideally I was hoping for sub 37:30 and as close to 37:00 as possible.

I headed over to Vancouver on the 12:45pm ferry to Tsawwassen. 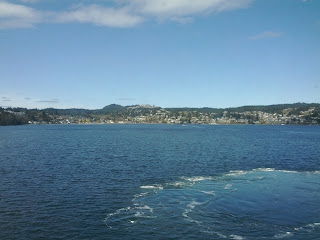 Ferry going the other way 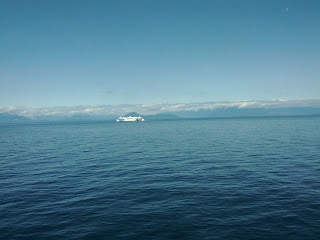 Waiting to dock, the "captain" bounced off of the dock 3 times before getting it right. According to the ferry worker just to the left out of the photo, it was a "rookie captain" and that he "must learn somehow" 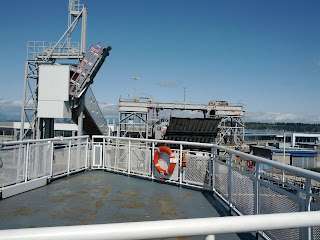 After the ferry I caught the bus into Bridgeport before catching the Canada line towards the airport.

On the Canada line 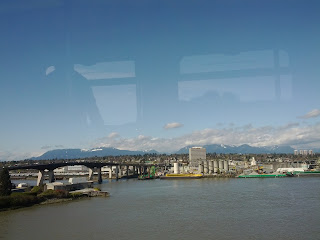 The race was putting us up at the Fairmont Airport Hotel. I was very impressed with the room, though a bit worried about the noise with being right next to the USA departures area of the airport. Not to mention I forgot my earplugs! Luckily though, I honestly did not even notice one plane while asleep. 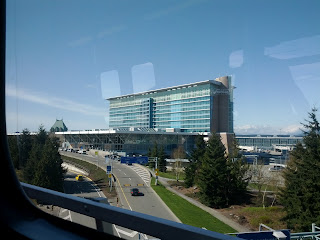 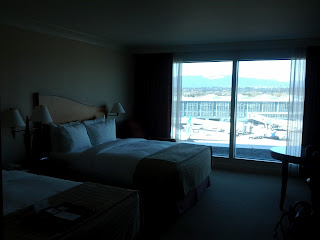 Back towards the bathroom 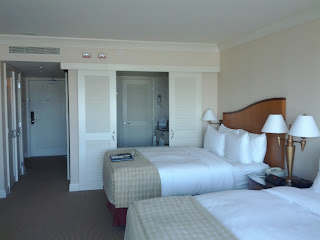 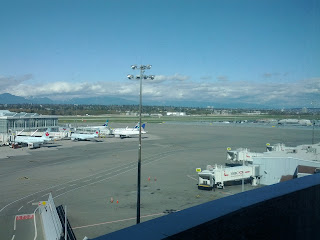 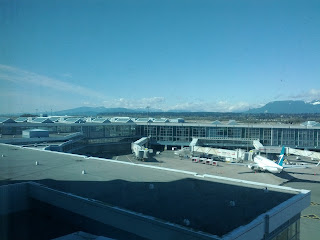 My roommate Melissa wasn't going to arrive until later that evening, so I picked up my number and hung around with some Victoria runners in the elite hospitality suite. I then met up with Kate Bazeley and officially met Kathy Butler (world class athlete and former Olympian). We met up with Marilyn Arsenault and Ian Searle before heading off on our own to meet up with some other athletes which included Dayna Pidhoresky (only a 1:11 half marathoner), Melissa Todd (from Colorado), Matt Loiselle and Rejean Chiasson (both of Toronto), all of whom I met for the first time.

The 6 of us headed out for supper at White Spot (or was it White Cap or White Fish), which I learned for the first time was actually a BC restaurant. I found it quite amusing what the others kept thinking it was called. When we got there, we noticed Marilyn and Ian sitting across the restaurant, so they ended up moving over to a table near by. We were eventually also joined by Craig Odermatt and Lisa Harvey. After dinner and a short stint back at the athlete hospitality suite, we all headed back to our rooms for the night.


Girls after supper (crazy eyes due to the camera on my phone) Myself, Dayna, Kate and Melissa Todd 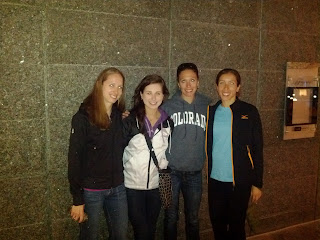 Within 5 minutes of arriving back, my roomie Melissa showed up having just arrived from the island. We caught up and settled in before turning in for the night. I had a less than ideal sleep, but it was normal for me. I never sleep through the night and tend to wake up 2-3 times. Not a big fan of the night sweats though, but those had been normal over the last few days anyways.


Ready to go on race morning 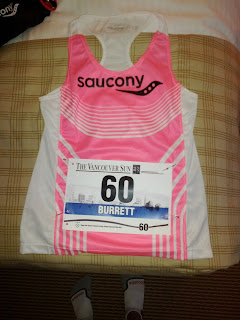 Morning of the race we woke up at 6:15 and had breakfast, got dressed and then rushed down for the shuttle to the start. It is always nice having a warm room and real washrooms to use before the race. I completed my warm up with Marilyn where we chatted and she boosted my confidence as I stressed a bit over being sick. It was also great to catch up and hear about her experiences of Flagstaff in person. A few drills and we were on the line. I caught the last portion of "O Canada" before we were off.

Sun Run has a downhill start, which everyone blazed through. I honestly do not remember every portion of the race like some runners. I tend to zone out per say. I remember seeing the 3km split said 3:10 and I thought that there was no way, with the next followed at 4:09. All makes sense when I see 3km said 890m and then 4km said 1.13km. I guess the signs were a little off. I then didn't see any markers from 4-7km.

At 5km we climbed up and looped onto Burrard Bridge. Coach John Hill of the Vancouver Falcons (VFAC) was at the start of the bridge and yelled out 18:15. I assume he must have been at the 5km marker as he tends to be at the half way point in races. I honestly thought to myself...  "18:15? Really? Shit, I raced a 5km on St.Patricks Day in 18:18", mind you most of the last km in that race was uphill. I slowed a bit on Burrard and watched the group of girls including Melissa, Amy and Sabrina pull away from me further.

On the downhill on the far side of the bridge, I specifically concentrated on a quick turn over. Sometime probably around 6-7km I think I caught Amy. My weakest point in the race was the 4-7km because after the 7km I felt suddenly strong. I kept pushing as best as I could. No 8km marker so the next marker I saw was 9km. Then we climbed up Cambie Bridge and I kept pushing. I slowed a bit on the initial hill but made sure to push on top knowing that the finish was not far away. I came down the off ramp which took us next to BC Place and finally I saw the clock in the low 36'. I gave it everything and sprinted in finishing in 36:44! Take that former PR of 38:20! A new 1:36 PR.

With the way I finished the race and how much I had to put into that final sprint, I feel as though I slacked too much mid race. I wish I hadn't let myself get distracted from 4-7km when my average pace dropped; however, it is definitely a great sign. I finished up 13th female and 122nd overall. Not bad considering the results show 21618 females (though I keep seeing different totals in various places). I definitely ran faster than I personally expected although many others believed I would do it.

After the race we did a cool down before heading into BC Place VIP area for the awards, where I saw Natasha Wodak (overall female winner), Melissa Todd (2nd), Kate (3rd), Marilyn (4th and top master) get their awards along with Kelly Wiebe (overall male/race winner), Kip Kangogo (2nd), Matt Loiselle (3rd) and Kevin O'Connor (top master). 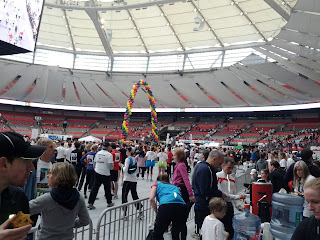 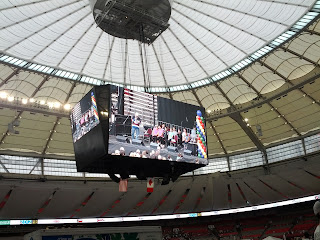 From there we went back to the Hyatt for the Post Race VIP Brunch, which had awesome food!


Post race brunch, myself and Dayna (couldn't resist as I think she is such a talented runner) 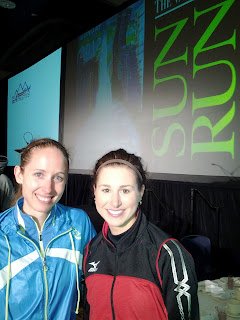 After that, everyone went on their own ways and Mel and I headed back to the ferry. In all it was a great weekend and has me utterly excited for my next adventure in another 1.5 weeks.

If you know me or if you have been following my blog, you might know that I am a HUGE Vancouver Canucks fan. Last year we nearly achieved the dream, reaching the Stanley Cup Final for the first time since 1994. Unfortunately, it ended the same way as in 94, losing in Game 7 only this time to the Boston Bruins instead of the New York Rangers. I was 12 and just finishing Grade 7 the first time. Last year I was 29. After narrowly wining the Presidents Trophy for the 2nd year in a row, I am finally ready for playoffs again. This video says it all.... it brings goosebumps to my skin. Go Canucks Go!

Well.... I think the title says it all. The Tuesday after the St. Patricks race I had a less than ideal workout which was followed by an evening coughing at work. I simply thought it was a tickle in my throat; however, when I woke up Wednesday I definitely had a cough. Otherwise I felt okay. By Friday it turned into a head cold along with the cough. My workouts were cancelled and replaced by easy running, which made the head cold feel better. I worked all weekend, even though I probably should have called in (especially Friday) and slowly on Saturday and Sunday my head cold became a lot better.

But.... the cough remained. Here I am 13 days after the cough initially started and I STILL cannot get rid of it. No workouts since. Only easy running and even then I feel like I have no energy and paces that used to be easy, are not. Coughing still exists. Last week a deep breath was followed by a wheezing sound in my lungs. With the weekend coming, I attempted to get a doctors appointment but it was all booked. So I spent Friday evening at the walk in clinic where I was prescribed Antibiotics to try. I have had 5 doses and I have seen no difference. I guess its viral and I have no choice but to wait it out.

As much as this sucks, especially with some big races coming up, I have to be grateful because I haven't been sick in awhile. Not to mention I haven't had a chest cold/cough in YEARS. It's just disappointing that it happens now. I hope to god I am over it by the end of the month, but of course the sooner the better. Although it may not seem like it, I definitely am trying my best to stay positive and not to stress too much. =)


Hope everyone else's training is going much better! I'll be back.... eventually =)