Within the past 2 weeks, I have been to Vancouver twice. The first time was back on Tuesday July 12th. I think I was called the Wednesday before to advise that I had my appointment. Of course, it fell on a day that I was supposed to work. Thankfully, I have a great co-worker who switched shifts with me so I could attend the appointment.

I guess it was my own fault for not clarifying; however, I was under the assumption that this appointment would be for the Ultrasound and MRI that my doctor ordered back in mid April (that last time I saw my doctor in person, which was before my 4 weeks off). At this appointment, he said he would request that both tests be done on the same day to make it more convenient. Unfortunately, my assumption was incorrect.

I'll get into the details in a minute. So back on the 12th, I packed up my car with supplies for the day and then headed over to the mainland. This was the first time I had driven in Vancouver and to be honest I was a bit nervous. Sure its just driving, but its around busier roads and more aggressive drivers (yes I said that). My appointment was at St.Pauls for 11:15am, which meant I was on the 8:30am ferry. Thankfully, since my last appointment, I had learned about TAP forms (Travel Assistance Program). Since my appointments were scheduled in Vancouver, I was eligible to have my travel paid for. Too bad I didn't realize that for my first 3 appointments over to Vancouver as it would have been way easier to drive to UBC than to bus it! Oh well, what's done is done.


Definitely nice to save some money on travel! 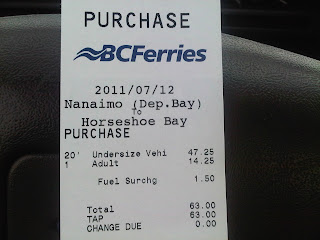 I didn't really take any photos (other than the receipt) on the way over as I pretty much slept in my car almost the entire way to Vancouver (1 hour 40 ferry). I attempted very briefly to find parking near St.Pauls and then gave up, driving over the Burrard Bridge to Kits Beach and parked in front of my sisters place as it was free (Thanks for the tip sis). Then a quick bus back over the bridge as I was running too late to walk and I arrived right on time.


I got changed into the hospital gowns and was in the small room for my ultrasound in no time. First off I had some young women who apparently was not fully trained and was learning from Dr. Cresswell. She attempted to find something, but I simply listened to her and the other tech guy asking each other if this way was direct or indirect etc. She was from Australia and before we knew it we were talking about bunion surgery as she had hers done recently back in Australia.


That killed time until Dr. Cresswell came in and did a variety of tests and scans. He checked ligaments and tendons for tears and couldn't really find any. He checked for hernias and again couldn't really find anything specific. He did say at one point that I "may" have had a borderline femoral hernia, but he also added that he wouldn't put $20 on it. Some abnormal activity in the area, but nothing that said for sure it was a hernia. So basically, I learned nothing from the hour long ultrasound.


From there, I mentioned about going to MRI, so the women took me down to see about that. Nope, no appointment. WTF? So we went back to the doctor. He wasn't sure what was going on either. Apparently the scratchy writing from Dr. Green said "Ultrasound proceeding to MRI." So Dr. Cresswell came down there with us. Not only was there no appointment, but there was no referral for an MRI, not on a waiting list, nothing. By this point I was very frustrated. I had waited 3 months basically (since mid April) for the Ultrasound and I asked how long I would then have to wait for an MRI now. In the end, Dr. Cresswell was amazing and asked the MRI department to book me in ASAP due to the inconvenience. So they booked me in for Friday July 22nd.


I thanked him for getting me in and then went up to the Occupational Therapy department to find my sister. She was in a meeting so I had to wait about a half hour. We visited briefly and then I was back off to my car. I had debated running in Stanley Park before heading to the ferry, but in the end I decided to head to the ferry and run my 45' easy run when I got home. I booked it to the ferry, attempting to make the 3:10 ferry. I arrived just before 3pm.... missed it. Ferry was long since full. Darn! 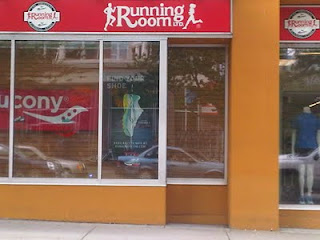 I asked the toll booth lady if there was somewhere to run around the terminal. She said yes and drew me a little map of a loop around Horseshoe Bay. Knowing the bay a little bit, I said, I have to go for 45' and she said to just do a couple of laps. Okay that was not going to work. I think her little loop would have been under 10 minutes long, probably closer to 5 minutes in length. No way. Guess I should have told her I am not a jogger who runs at snail pace. So I parked my car, got changed and headed off to explore, taking my phone with me in case I saw something cool!


Let me just say, Horseshoe Bay is HILLY. Not so much an easy run no matter how slow one goes! I went up and out of the bay and saw a sign for a park. I decided to go explore. It was downhill on the way there, so nice and easy, but what goes down must come back up (well technically if you want to get back to where you started!).

Here was the park... not much of a park. Simply a little field, parking lot and VERY short trails to the water. 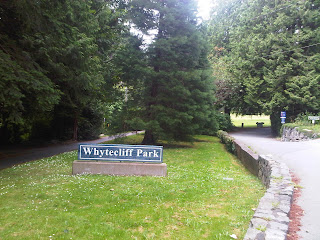 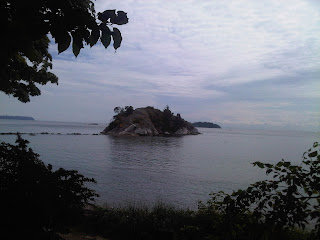 Running from the park back towards Horseshoe Bay 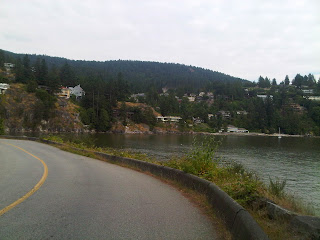 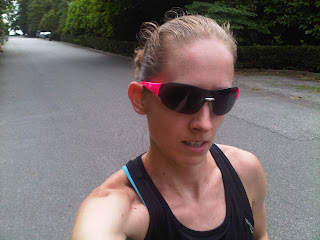 Top of the bay looking back down towards the terminal 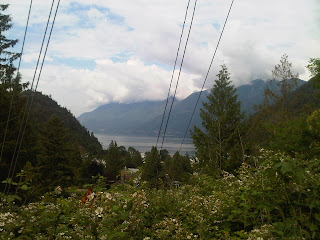 On the ferry looking towards Horseshoe Bay 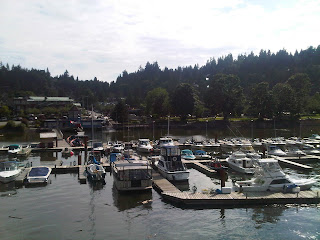 My view for the way home 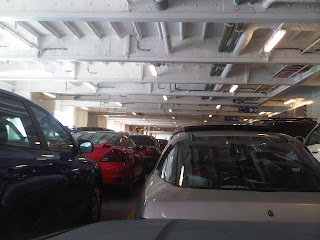 My preferred way to spend time on the ferry! Avoiding the crowds up on deck 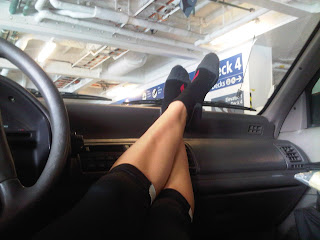 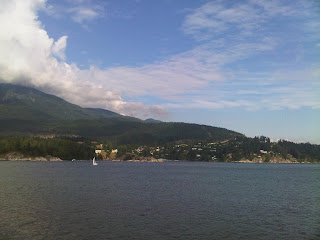 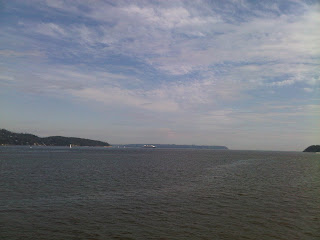 This boat we were practically racing at one point. I heard up in the cafeteria that there was some confusion with the captain on each boat telling the other to "go ahead" as they were going to cross paths. Apparently it was the Disney Wonder Cruise Ship. No idea where it was heading, but it appeared to be going north towards Alaska. 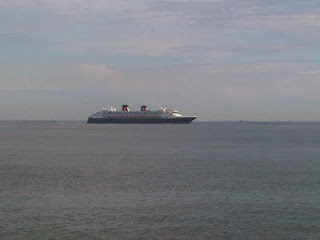 Then there was this guy. I wonder if he got yelled at by the captain. He was traveling right beside the ferry at one point. I didn't even have to zoom on my crappy Blackberry camera. 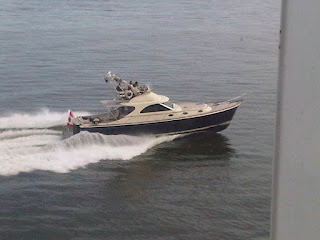 Really hard to see, but there is a slight change in the water colour. I took it at the last minute, so just caught it. 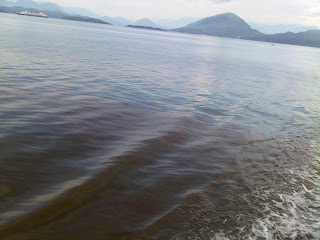 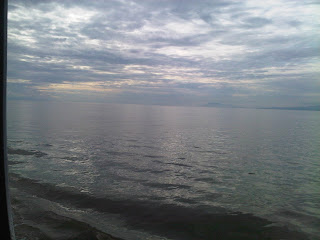 I have this thing with the numbers 10 and 17. You see, my birthday is October 17th, so in essence, 10/17. I see 10 and 17 everywhere. Whether I happen to look at my clock right at 10:17am or pm, or someones insurance expires on 10/17 etc So I went up to get some Yam Fries and to my amazement, my dipping sauce expires on October 17th. It's weird. My boyfriend thinks I am crazy, but these numbers seriously pop up ALL of the time. 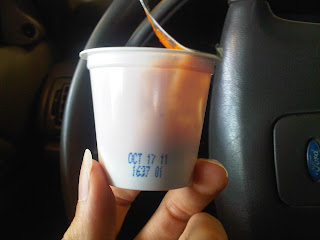 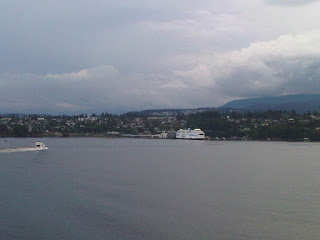 I suppose it is time for another update. I guess if I think back a few things have gone on over the past weeks. A few weeks ago I ran into a bear at Westwood Lake. I was there earlier than usual, which was 7:30 for me, just to do a 30 minute run. About 2km into the trail, I heard some rustling in the bushes off to my left, so I looked over. There I saw a bear about 15m away from me. He was in shallow water and looked over at me as I went by. A few seconds later as I went over a wood bridge, I heard him splashing around in the water. I didn't stop, but I did warn fellow runners/walkers that were coming towards me. That was my excitement on the trails. It was the 2nd time I have run into a bear at Westwood, the last time being about 4 years ago now I think.


Otherwise, I finally heard some news about getting further tests done. I was in Vancouver a week ago (Tuesday the 12th) for what I thought was my Ultrasound and MRI; however, that turned out to be just an Ultrasound. I now have to go back this Friday the 22nd for my MRI. I will write an update about both adventures in my next post as I have some photos from my blackberry that I want to upload and don't feel like doing that tonight.

Meanwhile my running is progressing. It's a slow progression and I feel rather unfit. I love that I am out running again as I certainly missed it; however, it plain old sucks to feel so unfit and to be working so hard to hold paces that used to be much easier. I know it will come back and I simply have to be patient, but I can't help but being honest and saying IT SUCKS. Running at slower paces beats not running at all though, so I am grateful. Again, I am not 100% healthy, my lower abdominal and hip flexors are still a pain every so often, but the hip pain that caused me to stop running hasn't shown itself in awhile.

That is it for now. No fancy stories, no fancy photos. Just a quick update to say I am still here and I am still running. And actually I am enjoying this late "non-existent" summer as I dislike running in hot weather! These milder temps are much more enjoyable! Till next time, be grateful for any amount of running you can do, regardless of how fast or how far you go!
Posted by Erin at 9:25 PM No comments: