It Was Bound To Happen

I had been so proud to have never DNF'd before; however, that "streak" has now been broken. A few weeks back I tweaked my hamstring. I had been dealing with some slight behind the knee issues coming back from the marathon but it would only appear at the beginning of some runs and go away within a few minutes. I never thought much about it. Provided I kept my hamstring happy, it seemed to be okay. That was until I attempted a "speed" workout one day. I put quotation marks around "speed" because these marathon legs definitely weren't that speedy. Nevertheless, that annoyed my lower hamstring a tad. A few days later during a tempo workout, I turned a corner to the left and I felt my hamstring tweak. It was minor and I was able to finish the workout; however, the next day my hamstring was sore during my entire run so I pulled the plug on running for a bit.

I had planned to race the Calgary Half Marathon coming up in just over a week and a half so I did everything possible to try and rehab. I cross trained, I saw Abe Avender at Island Optimal and had laser treatment on it as well. Each run attempt leading up to the race wasn't ideal, so I'd go back to cross training. I decided to head to Calgary to see what happened. I wasn't sure I would start but since it was the Canadian Champs, I was determined to race if my hamstring would cooperate. 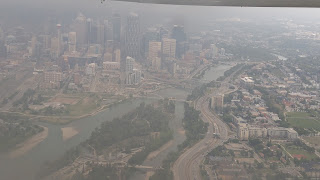 I flew into Calgary on Friday afternoon and met Sami Jabril in the airport before heading to meet our lovely ride Peter. The skies opened up as we arrived and we had a nice rain storm with some lightning for the drive. I checked in and then met Krista DuChene in Starbucks for a catch up, then went to dinner with Krista and Emily Setlack.

The next day I opted to try a short run. While it wasn't great, it also wasn't horrible. I decided to wait until race day to see whether I would run or not. I was still hoping the next day would be much better. After the run and shower, I met up with the rest of the hotel crew, which other than Krista and Emily included Calum Neff, Thomas Toth and Anna as we headed to the Tech meeting. There I finally met Josh Bolton and Tanis Smith in person.

It was a quick meeting before a few of us headed over to the race expo. I wanted to go check out the Team Mito 24 hour treadmill event and say hi to a few people I knew taking part. It was quite the sight and not long after getting there, Tristan roped me into an interview. Normally I am awkward as can be when it comes to those things, but Tristan kept the conversation light and flowing as we told stories about how we met in Maui and how I wanted to push him off a cliff. The full story is here, but a cut and paste from that day is this....

On another trail run I had an easy 60 minutes to do and decided to join Jeremy, Tristan and Adam on a run at Polipoli which had just opened up after being closed for over a year due to tropical storm damage. Let's just say that this was not a 60 minute easy run. It turned into more than a 2 hour adventure, crazy climbs and descents all while at altitude of over 5000 feet. This sea level girl has run in Flagstaff many times, but climbing at altitude always kills me. I may or may not have threatened to push Tristan off a cliff at one point and I may or may not have told him multiple times that I hated him. ;) It did give some gorgeous views, but this road runner learned that she is still very well a road runner and is not made for technical trails.

Anyway, the Team Mito 24 hour treadmill event was amazing and for a great cause which would be mitochondrial disease. During the 24 hours they  broke 7 Guinness World Records, which you can read about here. I was there to witness the men and women break the Team 24 hour Treadmill records. I was also there to witness Dave Proctor in some dark times during his 24 hour solo mission. Yes, I said it, 24 HOURS SOLO on a treadmill. Insane! In the end he ran 260.4km. I dislike even 30 minutes on a treadmill let alone 24 straight hours. Check out www.mitocanada.org for more info. 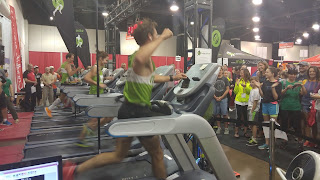 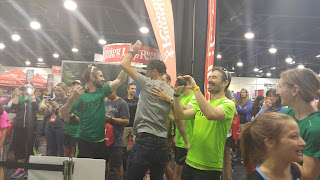 Dave in the background no longer appearing to have fun 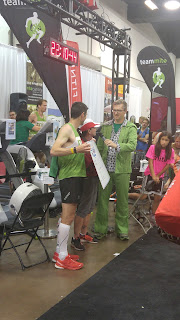 Later that evening I joined the rest of the hotel crew plus race crew Gavin and Craig (I think) for dinner at the Keg. That was an adventure for me. Needless to say my meal was forgotten and it took 85 minutes for me to eventually get my chicken. My bad for not speaking up earlier I suppose but anyways, it turned into a rather funny adventure.

Race night I slept like usual (crappy). I fell asleep rather early and then woke up and was up for a few hours. I received some unfortunate news that had me worried for a bit, but thankfully all would be okay. I eventually fell back asleep around 1am and then was up by 4:30. Who needs sleep right? I woke up and ate my Stoked Oats and hoped for the best!

We headed off to the race and I did a warm up with Krista and Emily and my hamstring/back of knee felt the best it had felt in ages. I was running on some anti-inflammatories though. Things were looking good and I was hopeful. I did a few strides and they felt good too, but then I did 1 stride too many and I began to worry. I decided to start the race and see what happened.

Ultimately I got only 2km into the race and I felt a pop (like a tendon popping over another) at the back of my knee. It caused me to jump in my step and I knew I was done. I carried on for a few more minutes to see what would happen. When I saw bike medics on the side of the road I pulled off. I apologize to the medics as they heard me swear. A LOT. They asked me if I wanted to stretch it out and jump back in and I said no, I was done. My first *@%#%*%%% DNF. I asked the quickest way back and they said the way I came and asked if I could walk. I told them I preferred not to, so a van was called.

The medics at the event were great. I was dropped off at the med tent (first time ever there) and put in the hands of Jeff Nessler, a physio from the Downtown Sports Clinic in Calgary. Bless his heart he worked on me for a good 45 minutes, even doing some IMS which isn't normally done in med tents. I suppose the good part about dropping out early is that I had the med tent to myself the entire time. Jeff did his best but there was only so much to do before I was strapped with an ice pack and taken back to the elite area to have a nice cry.

It was a rough experience and I probably shouldn't have started, but since it was the Canadian Championships I wanted to at least try. I rehabbed and did what I could to get to the start line and had hoped I would cross the finish line but alas, it was not meant to be. I will be back though, to get that damn finish line.


I will cross you 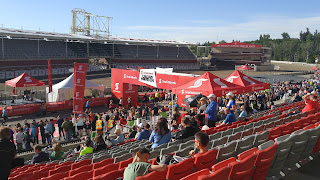 Post race I hung out with some good friends both new and old, had some beer at the Team Mito Wrap Up party and that helped. I spent the next week in Calgary visiting with friends and was able to take a side trip to Banff, Canmore and Lake Louise area in which I had never been to. Topped it off with a fun Saturday night before coming home and back to work on Monday. That week was exactly what I needed to escape a few life stresses at least temporarily.

While I am disappointed to experience my first DNF, feeling like I let the organizers down, I had to be smart and think of the fall. While I probably shouldn't have started, it was hard to know what was going to happen. This was one race, my goals remain and I will achieve them. 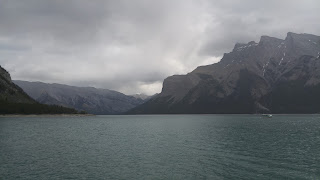 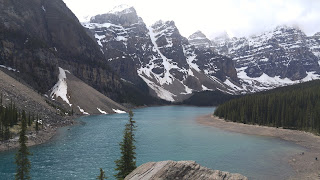 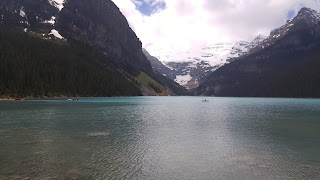 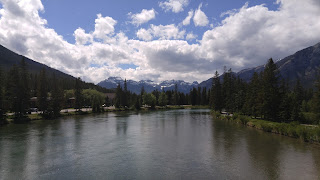 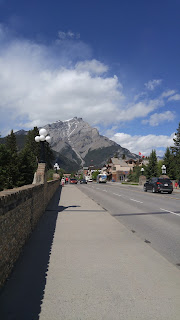 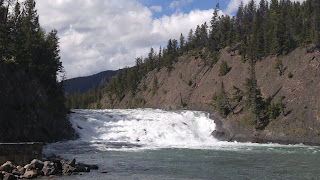 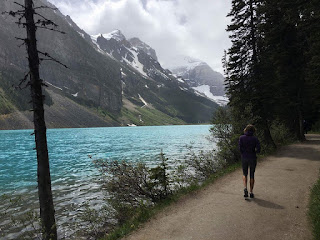 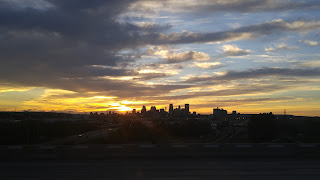